Oh, it's important all right...

Not that I needed reminding, but my excitement level rose to a new level when this notification arrived from the New York Philharmonic.  In just a couple of days, my Season of Sondheim begins in earnest.   It seems that the world is taking the opportunity to wish Stephen Sondheim a happy birthday.  He turns 80 on March 22nd.

I'm going to this Phil concert on both Monday and Tuesday night and at the end of the week will see Sondheim on Sondheim, a new revue of his music at Studio 54.  In April, I'll be going to another "birthday party" at City Center  and will be taking in Encores! production of Anyone Can Whistle and the Signature Theatre's production of Sweeney Todd in Arlington.  I wouldn't be surprised if I see A Little Night Music , if only to see Angela Lansbury on stage again at least one more time.

While this season of Sondheim is extra special because of all the live performances,  every day is a sort of Season of Sondheim  - his music permeates my playlists, posters of his shows decorate my walls, my Playbill collection is full productions of his shows from around the world and over the years, I have many books about him and his work, my video collection is full of his interviews, shows, skits, etc., I subscribe the quarterly magazine The Sondheim Review, and my best friends are devotees as well.

My first Sondheim show was Gypsy, starring Bernadette Peters, in 2003.  My daily devotion began in October, 2004 when I saw Opening Doors at Zankel Hall.  It was a Sondheim revue devised and directed by David Kernan.  The cast included Kate Baldwin, Victoria Clark, Gregg Edelman, Jan Maxwell and Eric Jordan Young.   I also saw revivals of Assassins, The Frogs and Pacific Overtures in 2004.  I also ventured to the upper east side to see community theatre productions of Passion and Follies.

Then, on March 19, 2005, my friends Noah, Vicki and I attended Wall to Wall Sondheim at Symphony Hall.  We were there for every minute, 12 hours plus.  It was like a master class in how to be an uber fan of Sondheim and I soaked it up.   Since then, I have seen productions of Sweeney Todd, Gypsy, A Little Night Music, West Side Story, Sunday in the Park with George, Company and one failed attempt to see Anyone Can Whistle in Philadelphia.

It's not hard to explain why I love his music - I think it's a combination of the smartness of the lyrics with the tunes, but above all the fact that he writes characters I understand.  He also writes for actors who sing - it's not the sound or beauty of the voice that makes the difference or gets the point across, it's the conveyance itself.   His music gives me pure joy in my heart and soul.

When you see a mostly complete list of Stephen Sondheim's shows, it's easy to see why his contribution to musical theatre is so awesome. 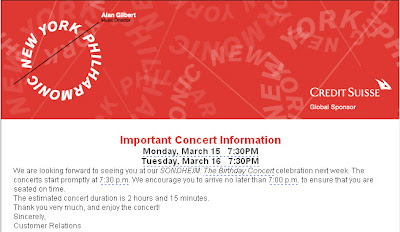