Macbeth at the West End Theatre 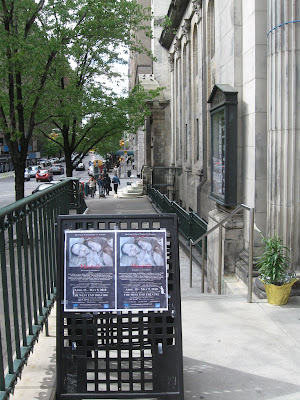 Shakespeare is happening only 8 blocks from my apartment.  EIGHT blocks!   Shakespeare on the Upper West Side and it isn't even summer and you don't have to wait in line all night long.  And it's GOOD!

The Frog and Peach Theatre Company are presenting Shakespeare's tragedy Macbeth at the West End Theatre at 86th Street and West End Avenue.

This was the first time I had seen Macbeth staged (except for Verdi's opera at the Met), although I had read it.   Seeing the action was riveting.  Lynnea Benson directs and keeps the pace moving, even through those long monologues of iambic pentameter.  It moves swiftly and seamlessly.   Ian Marshall is the fight director and made the action seem real - even taking a small cast and making them seem multiplied in the sword fights and battles.  He also somehow manages to get the cast to execute the fights without stepping out of their very small stage space.   The costume designer, Laura Taber Bacon, has dressed them in modern clothing and it works.  The production feels very professional, which is not always the feeling I come away with from off-off Broadway productions.

Moti Margolin is Macbeth and he is really fantastic.  He begins him reluctantly, then with complete enthusiasm as he succumbs to the manipulation, then with vulnerability as he slips into madness.  He makes the lines easy to understand with just the right amount of sarcasm and realism.  Other stand-outs in the cast are Lenny Ciotti who doubles as Seyton and Hecate and Todd Butera as Macduff.  Ciotti has the perfect voice for Shakespeare.   Butera was just plain bold.   I enjoyed Kaitlin Large's Lady Macbeth as well.  At first I thought she was too young and sweet looking, but she used that to seduce Macbeth into doing the deed, especially as she became more determined that it be done.    Amy Frances Quint also stood out as the main witch.

Margolin and Large also have no qualms about doing what it takes to make this an edgy production - they appear nude, covered with blood, after the king is killed.  It's very affective, frightening and quite beautiful in the dim light.   In fact, I thought it might be a bad ass production even before it began - Guns N' Roses was playing over the speaker system, sort of setting the tone.

I loved that there were few props and very little set in this small space - they let the words and action transport the audience.    It was intimate and real and everything else was shut out.    I did happen to overhear that the couple sitting next to me were also there the the previous day, quote "Once is not enough."   Although I was unable to stay for it, Sunday Matinees are followed by an informal talk-back with cast and Artistic Director Lynnea Benson.

The West End Theatre is a comfortable little black box theatre on the 2nd floor of the Church of St. Paul &  St Andrew United Methodist.  Coincidentally, I have occasionally attended worship service in their sanctuary but didn't realize that the gem of  the West End theatre was on the 2nd floor.

Macbeth  plays in rep on Thursday thorugh Saturday at 7:30 p.m. and on Sundays at 3 p.m.   It runs through May 9th. The running time is about 2 and 1/2 hours, which go by very quickly.  At only $18, the tickets are a bargain and are available  online via Smarttix or by calling (212) 868-4444.   Tickets may also be purchased in-person at the theater ½ hour prior to the performance. 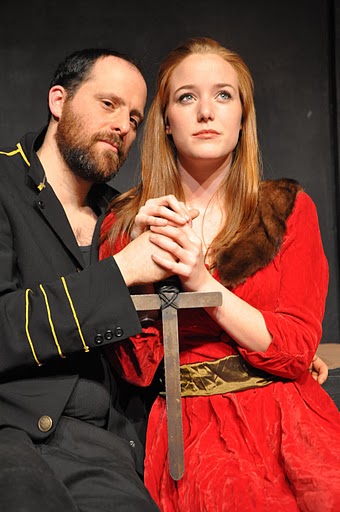