Mitzi Gaynor  is performing at  Feinstein's at the Regency until May 29th!  Part concert, part autobiography, it's all dazzle and is titled fittingly "Razzle Dazzle! My Life Behind the Sequins".

I grew up watching Mitzi in the movie musicals on AMC - especially South Pacific and  There's No Business Like Show Business so I had to accept the invitation from Feinstein's to come see the show.

Believe it or not, after a life time of making movies and doing her own show on the road as well as on television specials, Mitzi never performed in New York City.  She said, "For 60 years, I've been fighting coming to New York, but you're just like me, only better!"

Perhaps, she saved the best for last.  While there are no big dance numbers and the band is reduced to a four piece (including an unnecessary synthesizer), it's heartfelt, very special and one of the most fun evenings in a night club in New York City in a very long time.   She sings some hits from most known movies as well as some appropriate cabaret tunes.

Mitzi shared some personal stories about her life in show business - how she got started, her love affair with Howard Hughes (and how he insisted that she invest in a couple of plots of land just off the Vegas strip), her wonderful marriage to Jack Bean and her career - through side-splitting stories and song.  Especially funny were the yarns she spun about her There's No Business Like Show Business co-star Ethel Merman, whom she always referred to as "Mom".

In fact, two of the funniest stories I've ever heard in my life, included the Merm.  One was when she was a newlywed and had just flown to New York City to be a part of the premier of There's No Business Like Show Business.   "Mom" called her up and invited her to dinner at "Elmers" (El Morocco) with the Windsas...who turned out to be the Duke and Duchess of Windsor.   She re-enacted getting ready for the evening - complete with a description of putting on her cincher which sounds like quite a chore for the very shapely and buxom Mitzi (I don't dare try it).     The other story involved Merman and her best friend Betty Bruce (Tessie Tura in the original Gypsy) with a gallon of Dom Perignon in the back of  a Rolls Royce limo visiting Mitzi when she was doing a show at a Jersey casino.

The show included clips from Mitzi's movies and television specials and appearances.  Each time the clips were shown, she took the opportunity to change in to yet another Bob Mackie designed gown, each one sparklier than the next.  I was in sparkle heaven!   Mitzi is 78 years old and is as sexy and vibrant as they come - as well as very, very baudy.

”.  She was unable to attend the awards ceremony last month, so it was presented this evening.

The show is in the ballroom instead of the main night club and was filled to capacity.   Being opening night, the room was full of celebrities, including Michael Feinstein, Chita Rivera, Tommy Tune, Poggy Bergen, Clive Davis, Joy Behar and Paul Shaffer as well as reviewers and Broadway journalists.   The Theatre Aficionado had the opportunity to mingle after the show, glasses of champagne in hand, and tell Mitzi how much we adore her.

Seeing Mitzi Gaynor at Feinstein's, in her New York debut, is something that is not to be missed.  She'll be there until the 29th - already a week longer than planned.  She'll play Tuesday through Thursday at 8:30 PM and Friday and Saturday at 8:00 PM.  All shows have a $75 cover with  $95.00 premium seats available, in addition to a $40 drink/beverage minimum.   Tickets are avilable via http://www.feinsteinsatloewsregency.com/ and TicketWeb.com or at (212)339-4095. 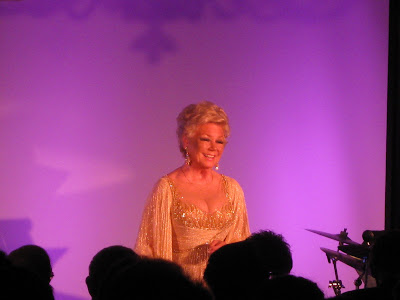 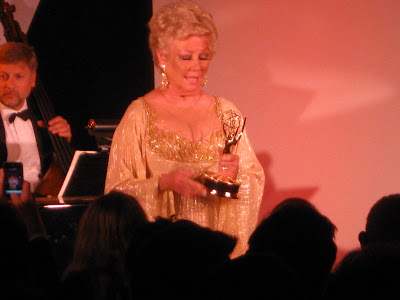 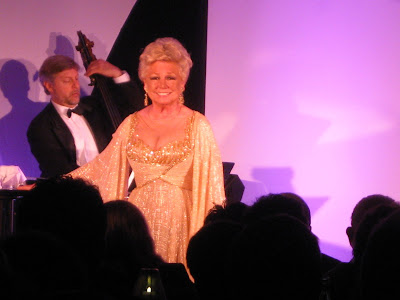 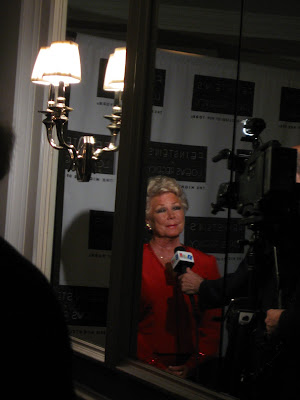 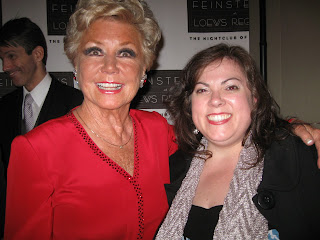 Steve On Broadway (SOB) said...
This comment has been removed by the author.
5:05 PM

Um, because it's not a Tony...it's a New York area Emmy Award.