A play about Ann Richards?! Written and performed by Holland Taylor?!  This clipping out of the Houston Chronicle arrived in the mail yesterday from my Aunt Diane, who wrote, "This made me think of you."

Indeed, anybody who knows me well knows I am a dedicated admirer of the late great Governor Ann Richards.  As a character, woman, a politician, Texan, and all around great American, she was The Top in my book.   I used to coincidentally sit behind her sometimes at church in Austin and once I ran into her here on the Upper West Side.

If there ever was the perfect subject for a stage comedy and/or drama, Ann Richards' life certainly provides perfect inspiration - she lived it all - poverty, education, alcoholism, divorce, children, grandchildren, public service, great humor, and last but not least friends in high and low places.

The fact that Holland Taylor, who was born and raised in Pennsylvania and has spent most of her life in New York City and Hollywood, was inspired by Richards' life is a testament to her far reaching impact.

The two-act play, "Money, Marbles and Chalk!", already ran last weekend at The Grand in Galveston.  It's an "affectionate sketch of Richards at both her most vibrant and most vulnerable, and was meticulously researched by Taylor", says the Galveston Daily News.  Apparently, it's set up as a college commencement address and includes anecdotes from the Governor's friends and family and even recipes (yes, she knew how to make cornbread!).

It sounds perfect to me.  I hope Ms. Taylor's play is published and gets a run here in New York.  She's spent time on the stage here as it is, plus Ann Richards became a "Texpatriate" when she became a New Yorker and took a job as a consultant.

Then, there's that time when Holland Taylor stepped on my foot.  At least, I'm pretty sure it was her.  And yes, she apologized.

UPDATE:  Money, Marbles, and Chalk: an Affectionate Sketch of Ann Richards will play the Paramount Theatre in Austin, Texas on Friday, December 17, 2010 @ 8pm 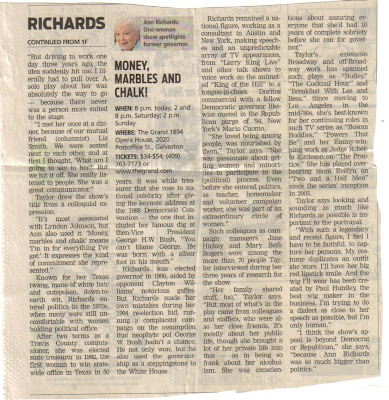 Let's meet and enjoy this someday. Just like watching your eyes bug out after sitting down RIGHT behind her most excellent self. It'd be fun to remember a stage in life that is never to be topped!

Just saw this on Sat, May 7th, here in Austin. IT WAS AWESOME! Hope it does get plenty of run time- you would enjoy it.

Thanks Red! It's playing at the Kennedy Center this coming season and I may go down for it, although I'm still hoping it gets a New York run. She had plenty of fans in the city she relocated to after her run as Governor.