Missa Solemnis at the NY Philharmonic 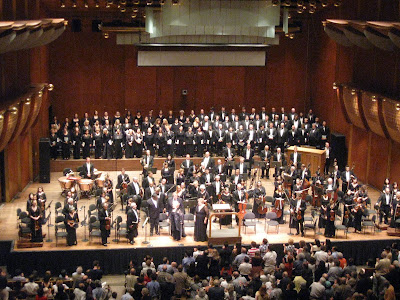 Last night, I saw the New York Philharmonic's performance of Beethoven's Missa Solemnis.  It was the final ticket from my 2009/10 vault, purchased back in August, 2009.

I primarily went because I wanted to hear tenor Anthony Dean Griffey, soprano Christine Brewer and bass baritone Eric Owens, some of the most powerful and beautiful voices in the world.   I was not previously familiar with mezzo-soprano Jane Henschel, but now want to hear her again as soon as possible.


I was transported by the beauty of this choral piece.   It's a High Mass with a smallish orchestral accompanyment, including organ and timpani.  Missa Solemnis translates to "solemn mass".  It's broken into six movements - Kyrie, Gloria, Credo, Sanctus, Benedictus and Agnus Dei and lasts about 80 minutes.  While the text is from a Catholic mass, it is similar to some of the language found in the Apostle's Creed and other liturgy of United Methodist.
The voices were simply enveloping, particularly the male voices on dona nobis pacem - grant us peace.  Christine Brewer can knock you over like a feather with her power, but last night her pianissimi was divine.  I was was moved very much by Anthony Dean Griffey's tenor as well - it's so beautiful and full.   Eric Owens' bass is thrilling.  I love the mezzo voice and I was very pleased with Jane Henschel.  All four voices blended gorgeously and were easily heard over the orchestra and the chorus.   Their voices sent chills down my spine and induced tears.
Missa Solemnis was exactly what I needed this week.  When I purchased the ticket, I looked only at the names of the soloists involved without realizing that week would mark the tenth anniversary of my Dad's death.   I didn't know that I would be lifted from my sadness by the spiritually transportive music of Beethoven. It was cathartic to say the least. 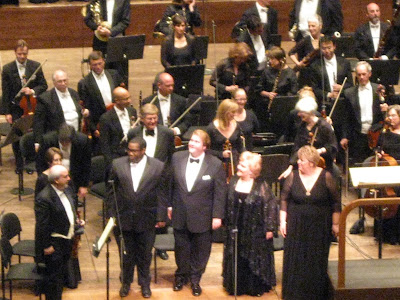