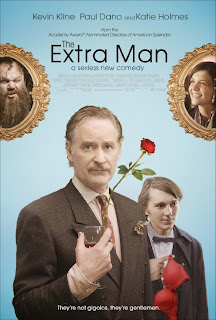 I can't wait to see The Extra Man starring Kevin Kline, Paul Dano (Little Miss Sunshine!), Marian Seldes, Lynn Cohen , John C. Reilly and Katie Holmes!   In New York City, it's only playing at the Clearview at 1st & 62nd and the Angelika on Houston, but I'll make it one of the few I see this year.    Unfortunately, it's getting only a limited release over the next few weeks in just a few states.

In a six degrees of separation situation, Marian Seldes was one of Kevin Kline's teachers at Julliard.  Also, I've encountered Lynn Cohen a few times at one of the 8th Avenue bus stops waiting for an uptown bus - I recognized her the first time from her appearances on Law & Order, which she laughed about since most people recognize her as Magda on Sex and the City.

Wow, that looks really good! Thanks for posting it, not to be missed!