What a year it has been for Hunter Ryan Herlicka.   Just a little over a year after graduating from Carnegie Mellon University, Hunter made his New York cabaret debut at Feinstein's at the Regency on Sunday evening.   This is on top of a Broadway debut as "Henrick" in A Little Night Music.

It's a rare thing to live your dreams and even rarer to live them well at such a young age - something Hunter is having no problem doing at all.

Hunter presented a beautiful cabaret set, under the seamless direction of Diana Basmajian and music direction/accompaniment by the immensely talented Mary Mitchell-Campbell, at Feinstein's at the Regency last Sunday night.   The set was tender with the right mix of sentimentality and humor.  Hunter has great comic timing and doesn't shy away from sharing his emotional side.

The room was filled with fans, friends and family.  He took time to point out some celebrities in attendance - something he never grows jaded about - Phyllis Newman, Eileen Fulton, Bruce Vilanch and his co-star and dressing roommate Aaron Lazar (all pictured below).  Hunter acknowledged his family - pointing out his grandparents and his parents who have supported his dream and his self diagnosed "Broadway addiction".   He imparted stories of their encouragement of his love for theatre by bringing him to New York at a young age, and a hilarious recounting of of his mother even coaching him on Barbra Streisand's version of "With One Look" for a community theatre role.


He opened with "I happen to like New York," which was cleverly mixed with "Another Hundred People".   While he never held back on his obvious love for Stephen Sondheim, he included songs from a couple of other composers, namely Cy Coleman because Peter Pan was the first musical he loved.  As a child, he watched an old vhs of Mary Martin's television version of Peter Pan.  He learned those songs early on and never forgot them.   In a lovely anology, he gave us New York City as  his "Never Never Land" - a place where dreams live and you never grow up.

Hunter was the first actor to be cast in the current, first ever, revival of A Little Night Music.  It's not lost on him that not only is he in a show by his favorite composer, he played next to a legend and a huge star since November and on July 13th, he gets to take the stage with more legends, particularly Bernadette Peters.   He's still in a little shock over this.  (He and I first met at Bernadette's party after her concert last November and we could not have imagined this.)    This was the perfect moment to present "The Glamorous Life," from the movie of "A Little Night Music."

This was one of the most enjoyable evenings I've had at Feinstein's.  It's exciting to see a friend performing, but when they blow you away it's a whole other matter.  I've enjoyed his performance in A Little Night Music, but that's a limited character.  Here Hunter shared his sweet and funny personality as well as a glimpse of his dreams and his gratitude.  He has the panache and poise of an old pro of the cabaret stage.

I found myself without a kleenex, something I won't forget to have on hand the next time I see him perform on a cabaret stage, which I hope happens again very soon. 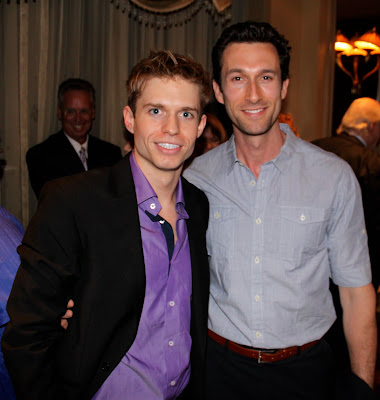 Great write-up. Wish I could see the show. And wish I could have been in the audience to see Eileen Fulton, an icon in my life from my boyhood days as my mother watched "As The World Turns."

Thanks Steve. Me too about Eileen Fulton! She occasionally has done cabaret and is actually putting together a new one with hopefully Diana Basmajian, Hunter's and also Kate Baldwin's director. Let's go together when she does her show.