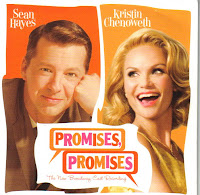 The new Broadway cast of Promises, Promises has recorded an album with Sony Masterworks Broadway.  Based on the film The Apartment, it's set in late 60s and is about Chuck Baxter who lets his boss Sheldrake use his apartment for liaisons with a mistress Fran Kubelik.

Sean Hayes is Chuck Baxter, Kristin Chenoweth is Fran Kubelik,Tony Goldwyn is J.D. Sheldrake, 2010 Tony Award winner Katie Finneran is Marge MacDougall and Tony Award winner Dick Latessa as Dr. Dreyfuss. The large cast also consists of 27 actors including Brooks Ashmanskas as Mr. Dobitch, Peter Benson as Mr. Kirkeby, Seán Martin Hingston as Mr. Eichelberger and Ken Land as Jesse Vanderhof.
The movie was musicalized by pop composer Burt  Bacharach  with lyrics by Hal David, with a book by Neil Simon.  Both the original production (with Jerry Orbach and Jill O'Hara) and London production (with Betty Buckley and Tony Roberts) were recorded and many of the songs were top 40 hit singles for Dionne Warwick.
I really enjoyed Sean Hayes as the host of 2010 Tony Awards, along with Kristen Chenoweth's appearance as his sidekick.  Even though I haven't seen the production itself, when Sony Masterworks Broadway offered to send me the recording I happily responded since I loved what I heard at the Tonys, plus I'm a fan of the original and London cast albums as well as some of the Warwick recordings.
The recording is fantastic.  Thankfully, the original orchestrations by Jonathan Tunick are in place.   The vocals from Sean Hayes and Kristen Chenoweth are lovely, particularly on "A House is Not a Home" (although this is not from the original score) and "I'll Never Fall in Love Again."   Their voices blend together very nicely.   Chenoweth, an operatically trained soprano, is more known for some vocal pyrotechnics but here she's crooning.  I found Sean Hayes' voice surprisingly sweet and affective.
With the exception of "I Say A Little Prayer," which was a big Bacharach and David hit for Warwick, this revival is the same as the original.   I'm not sure the inclusion of "Prayer" adds anything to the show or if it just gives an extra song to Chenoweth.   The biggest difference is the sound of "Turkey Lurkey Time".  The original "Turkey Lurkey Time" sounds shrill and I find myself only wanting to see the iconic youtube clip with Donna McKechnie dancing as if there's no tomorrow.    On this recording, the song itself is quite listenable.
The 33 page liner notes include all of the lyrics and great production shots.   It's a great souvenir of the show or at least for me, an fabulous addition to the other recordings I already own.

Loved seeing and hearing Sean from a tv comedy I used to watch. Isn't it amazing to hear people you've come to appreciate for their acting, and then love their voice style and sound?! BTW, are you bored b/c you've blogged um, a lot this weekend. OH, love the entries. take care

Hey Dee - you're so right about appreciating an actor or performer for one thing and then another. Not bored at all, just had a very work busy and I enjoying catching up on my Adventures.