Renée Fleming and Lang Lang at the Kennedy Center

Sally, Kari, Roxie and I fancypantsed ourselves south to Washington, D.C. on Saturday for the National Symphony Orchestra's (NSO) season opener at the Kennedy Center.  The guest artists were Renée Fleming and Lang Lang - obviously our reason for the journey.  It was also Maestro Christoph Eschenbach's first concert as the new director of the NSO.

It was the best concert in recent memory for many of us.  Besides being our first classical evening of the 2010/11 season, I don't think we could have had a better program.

What a treat it was to hear Renée sing Strauss' Cacilie and Morgen, on top of Strauss' Four Last Songs .  It is my opinion, that nobody sings Strauss better than her and I have heard others try.   Maestro Eschenbach provided piano accompaniment for Renée's Morgen.  Lang Lang sat behind the orchestra for this and seemed to be just as transported by this gorgeous piece as the rest of the audience. I first became a fan of Renée's because of concert at the Chatelet du Paris that was broadcast on the Ovation TV over and over - Maestro Eschenbach was the conductor. I felt very moved by seeing them perform together on Saturday night. I think he will have to whip the NSO into better shape, but he's definitely in the lead by bringing Renée and Lang Lang to get the party started.


Renée's gowns were sensational, as usual.  It was great fun to see her mock a diva tantrum when she saw that concert master Nurit Bar-Josef also wore green.   Her bling was especially BLING for the evening, particularly after she changed into her black gown for her encore of Morgen.  Oh my God, my cones and rods are still burned from a sort of diamond ball of a ring.  It caught the light when she walked out on stage and I swear if it had been an open roof, it would have been like the Batman Signal. I tried to get a closer look at it backstage, but it might have been awkward to actually grab her hand and drool over it.


Wow! Lang Lang!  Live!  My friend Dustin turned to me after he finished and said, "He makes playing the piano look orgasmic."   His playing is completely consuming and exciting.   I usually love sitting ont he opposite side of the house so I can see the pianist's hands at work on the keys, but in this case, his face was just as expressive as his hands as he is performing.  He played the Liszt: Piano Concerto No. 1 in E-flat major.   After many bows, a second bench was added and Maestro Eschenbach joined him in a duet of Debussy's Petite Suite .   It was such fun to watch these two masters play this beautiful piece which was at once gorgeous and playful.

It was a gala evening for the NSO and they were throwing a ball after the concert.   How fun it was to look down into the audience - a sea of gorgeous gowns and tuxes.  Among the glittery people, we saw Supreme Court Justice Ruth Bader Ginsberg!  Wouldn't it be wonderful if more of our government leaders  attended classical concerts?   Wouldn't it provide them with a sense of peace they could pass on?   If only.
It's always exciting being at the Kennedy Center where there is so much going on.  There was a lot of traffic going in and the parking garage was full.  The halls were teeming with excited people going to the many theatres for performances at the Washington National Opera and Cirko de Mente in the Terrace Theatre.

In addition to our usual posse, we welcomed a newcomer to our backstage visit with Renée . It was our dear Roxie - she had only been a fan of Renée for five weeks and 7 hours by the end of the concert and it was fun hearing her tell her so. Chelsea and I, and others, have been yelling at her about what she's been missing for years - right when we were about to give up, she went and watched Armida  all on her own and that's the one that did it. Huh! Okay then!   How fun it was to see her meet La Diva, even though she nearly crushed my hand when I pulled her over for the introduction.   I particularly enjoyed Roxie telling Renée that she loves the Counting Song like no other.

We had the bonus of cheering for Lang Lang as he went through our group.   What a delight he was he thanked us and bowed to us.   We also shook hands with Maestro Eschenbach on our way out.

As usual, being a fan of Renée's means that there will be lots of socializing in connection with her performances. We made a weekend of it - lots of adult refreshment, delicious dining and so much laughter that my voice is practically gone today. She is the tie that binds us and we are all grateful. Roxie said, "Renée's voice filled a void that I didn't know needed filling." Indeed, her voice gets us through tough times, cures loneliness, and above all brings joy. It's very special to be able to share this feeling with like minded friends.

My dear friend Wanda took these photos from her first row center seat. Had she been any closer, she would have been on the podium. She's a gem to share them with us. Thanks, Wanda! 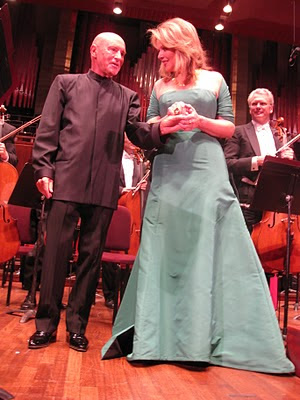 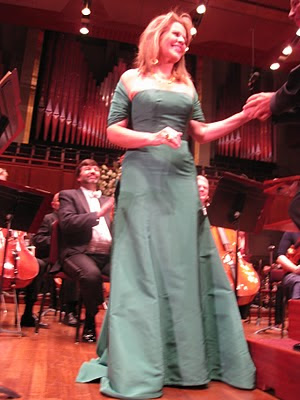 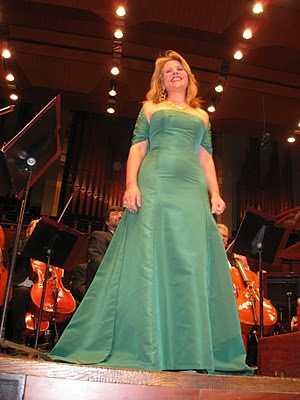 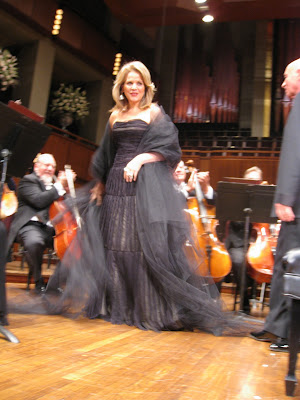 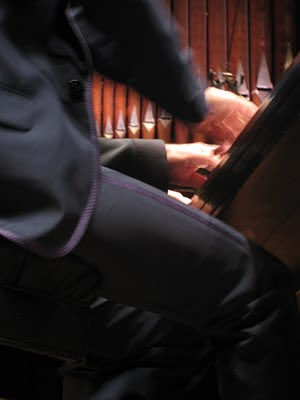 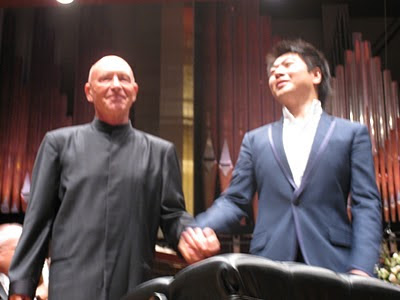 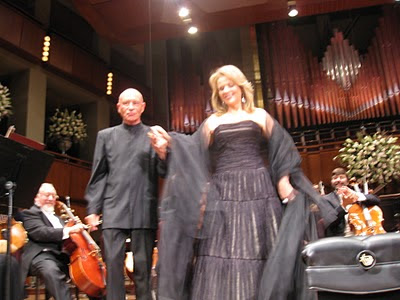 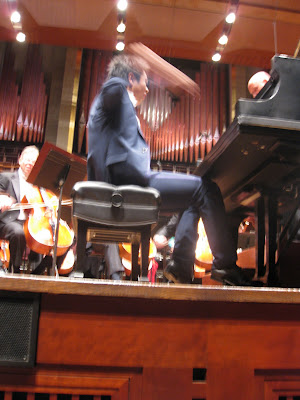 You are absolutely correct when you state that Fleming's voice cures all sorts of loneliness and fills voids in our lives, which I know that Roxie actually said, but I am sure you agree, and I cannot imagine my life without having the pleasure of opera and classical music. You were blessed to have been able to so richly enjoy this concert. I cannot wait to visit the Met for the first time!
-Tyler.

You turned an adjective into a verb. I love doing that. Fanci...ed. Perfect. Amazing adventure Dear Friend

I am so enjoying reading your blog! I, too, am a HUGE Renée Fleming fan! May I ask you how you arranged to visit her backstage? Is there a special person you have to call or e-mail to? Having booked tickets for 5 of her concerts/operas this year, I feel I should finally overcome my shyness and try to shake hands with her :-))) I would be really grateful for any advice you might have!!!

Hi Raphaela - Thank you! You can send me an email for more details.