Das Rheingold at the Met Opera

The time between the end of the opera season and the beginning of the next season feels like what I think those years that Moses and his people wandered around the desert - hot, thirsty and just plain bored .   I have tickets for eleven operas this season and plans for Varis Rush here and there - my most ambitious season yet.    And finally, I was back at the Metropolitan Opera last night.  It was for Das Rheingold, the highly anticipated new production of Richard Wagner's "Ring Cycle" by Robert Lepage.
The evening began with dinner at Ralph's on 9th Avenue (my favorite Italian in the city - always good, always inexpensive, always welcoming).  It was a reunion of sort with Khaleem, who came in from Boston, Chelsea who came in from D.C., Sally, Kari and me.   It's clear that the more things change, the more they stay the same, i.e. laughter was the main course at this meal.
On to the Met, my heart was beating fast as we saw familiar characters in the lobby and in the house.   Kari, Sally and I sat in the next to the last row of the family circle - even with buying tickets early, we were happy just to have seats as the production run is sold out (except for Varis Rush Tickets - if you don't want to wait in the line for rush, feel free to hire me for a hefty price; let the bidding begin).
This was the first time I ever heard Das Rheingold.  First, I was impressed with the orchestra - I don't know how many members were in the pit, but it was practically spilling over.  SIX HARPS!   So many trombones and especially French horns!  So exciting!    Maestro Levine, now in his 40th season at the Met, conducted them with purpose and fluidity, if a little slowly.
The singers were magnificent: Bryn Terfel as Wotan, Eric Owens as Alberich, Stephanie Blythe as Fricka,  Richard Croft as Loge, Wendy Bryn Harmer as Freia, Franz-Josef Selig as Fasolt, Hans-Peter König as Fafner, Patricia Bardon as Erda, and Gerhard Siegel as Mime.  Eric Owens stole the show vocally:  his bass is a gorgeous full boom.   Richard Croft was delightful as Loge.  In his firepants, he was adorable and magical (a little like that Christopher Fitzgerald leprechaun in Finian's Rainbow!).  There's a lot of stand and deliver as they tell the story, but it's definitely thrilling to hear these beautiful voices so easily, even when you're practically what feels a mile away.


I was expecting a bit more from the procution itself.  I think this is what is call over-hyped.   Lepage directed the Damnation of Faust at the Met a couple of seasons ago and it was technologically very, very cool and visually thrilling.   Here, he is almost a minimalist.  The set is just made of giant planks - while it does move and rotate interestingly, it's slow going and creeky - even loud to the point where we thought maybe they need a little WD40.   Some of the lighting and projections were beautiful and there are some very cool scenes - the Rhinemaidens are dressed as mermaids, extended from cables so it really looks like they are swimming and cavorting under water at times.   There is also a scene when Wotan and Loge journey across a set that seems like stairs turned on their side - it's visually stunning.  It also looked dangerous.   I thought while it was happening that it couldn't possibly be the singers themselves.  I was right - Kari emailed this morning with the link to the Times article that includes the information that there are in fact body doubles.

The house, completely packed, reacted vocally at times and it seemed as though all were having a good time.  It may have been one of the first times in the Family Circle when people didn't rush to leave their seats during the curtain call.

This opera, a prologue to the rest of the Ring Cycle, is clearly about the music and setting up the story, with no major arias to stop and awe the audience.  Even though I was left underwhelmed by the production itself,  the music is sweeping, gorgeous and loud and I loved it.   I will be looking forward to the next installment in the spring - Die Walküre.
I am currently without camera so I attempted to document the evening using my Blackberry camera: 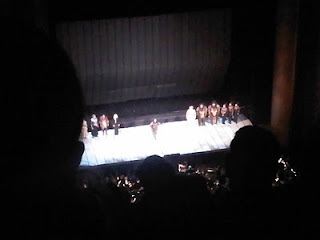 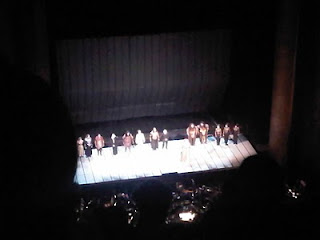 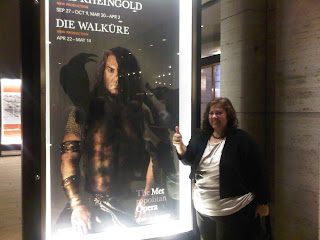 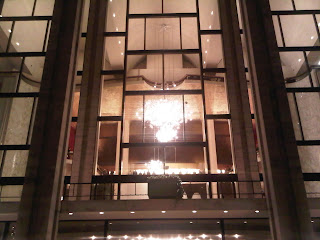 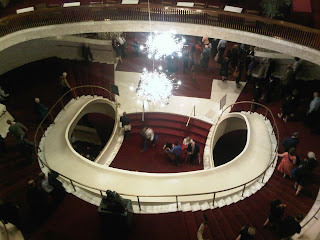 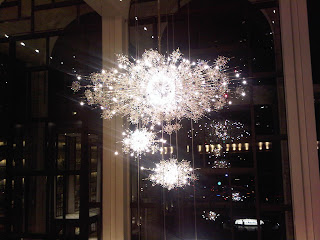 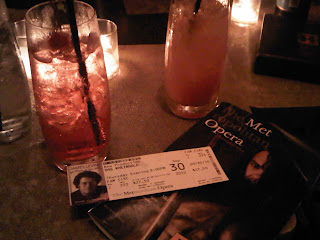 Well bummer. I'd love for the hype to match the results for once...
Thanks for review!

You know, I'm pretty hopeful for the rest of the Cycle. And like you, I wasn't overwhelmingly awed by the projections, but I was certainly thrilled for the overall theatricality - singing, staging, orchestra, etc.