Marilyn Maye's Kind of Broadway at the Metropolitan Room 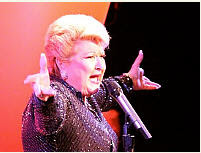 I have heard Marilyn Maye sing three times in the last three months and I am now completely smitten.   First was at the Broadway Originals concert at Town Hall, then with the New York Pops at Carnegie Hall (which turns out, was her Carnegie Hall Debut  - about which she said, "Lord know I've practiced enough"), and last night, we had the pleasure of seeing her own show at the Metropolitan Room.

I couldn't believe that she only made her Carnegie Hall debut only three weeks ago - this is a performer who could easily sell out that joint. Marilyn, smart and very funny broad with just the right amount of baudy, sparkles in this act called "Her kind of Broadway."

Prefacing her evening with the self-acclaimed "too old to be humble," she shared stories from her fascinating career - from her failure to fit in with the happening 60s to becoming "a commitment singer" to regional theatre work which kept her a member of Actor's Equity to her record holding 79 appearances on the Tonight with Johnny Carson.

Accompanied by Tedd Firth on piano, Tom Hubbard on bass, and Ray Marchica on drums, "Her Kind of Broadway" was a solid ninety minutes of jazzy and swinging arrangements of musical theatre songs.    With her warm, chocolaty contralto alternating between booming with fun and dripping with emotion, she turned these Broadway tunes into a rich and sparkling evening.

There was a thrilling Hello, Dolly set - a role she played in regional theatre in at the Starlight Theatre in Kansas City and later in Galveston, Texas, during the sweltering summer about which she quipped "stars don't sweat, they exude."   She even recorded a whole album of Hello, Dolly.

Marilyn sang a set of songs from her days as a "commitment singer" i.e., she would be contracted to record a Broadway song for airplay before the show hit the stage.  She originated "Cabaret" before a certain other singer won an Oscar for the movie role, quipping, "She knows that it's mine."   She was also the first to sing and record "I'll Never Fall in Love Again" from Promises, Promises, even if  "that Warwick girl had the hit on it."    She also sang an foot tapping rendition of "Step to the Rear" from How Now Dow Jones.  The song proved to be a bigger hit than the flop show ever had a chance, especially since Lincoln Mercury appropriated it and changed the lyrics as an ad for which Marilyn received four years of residuals, gleefully exclaiming, "That's where the bread is!"

She sang a set to celebrate the 100th anniversary of Frank Loesser's birth too - Guy and Dolls (hysterically changing lyrics to "When a guy buys bling for a chic who can sing", Fugue for Tinhorn, Oldest Established Permanent Floating Crap Game, Ask Me How Do I Feel on which she forgot a few lines and the audience happily helped her out, "I love it when the whole audience knows all fo the songs."   She also sang Loesser's Joey and Standing on t he Corner Watching All the "Guys" Go By, which she invited the audience to join in on, until she changed a line to "idolize my cougar ways" which brought the house down.

Her rendition of Lerner & Loewe's "Wouldn't It Be Loverly" and "On the Street Where You Live" may be the coolest covers ever done from My Fair Lady, while her "Have you Met Miss Jones" by Rodgers & Hart was heartbreaking.   Her connection to this last number was that her cousin Joy Hodges was the first to ever sing that song in the 1937 Rodgers and Hart show "I'd Rather Be Right" opposite George M. Cohan.  Now that's a connection to a song.

A revelation to me was that Marilyn played "Sally" in Follies at the Wortham Center in Houston.  Her "Buddy" was Harvey Evans, who was in the audience, while "Phyllis" and "Ben" were played by Juliette Prowse and John Cullum.   She later played "Carlotta" in a production in San Diego - the "good thing about Follies is that there are lots of parts the older you get."   She sang "Losing  My Mind," not maudlin but brightly.  She also gave us "I'm Still Here," which she definitely is.   The latter was a thrill to hear again after she brought down Carnegie Hall.

She finished up the show with "It's Today" from Mame, complete with high kicks accentuated with cymbol crashes.     I found this particularly appropriate as I have a feeling that Marilyn Maye is a broad who loves and lives life to its fullest with an Auntie Mame attitude - she shimmers with life and love.

There are several more chances to catch this show before the end of the year - she's at the Metropolitan Room tonight and tomorrow night.  On Saturday, she's teaching a Master Class - email marilyn7464@aol.com for more information on attending. She'll also play one more night with Billy Stritch at the piano on December 13th at 9:30 at the Metropolitan Room.
at 3:08 PM

I saw Marilyn Maye last night in Galveston, TX. She was excellent. She did most of the same songs as you mentioned, so I was glad to remember what they were. As a bonus, her pianist Tedd Firth was a show in himself. He was great.