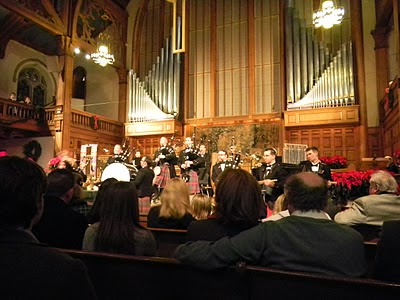 One of the final performances I attended in 2010, and of my favorites of the year, was the Pipes of Christmas.

I happened to notice light pole banners on Central Park South advertising the event.  Since it was something I had not experienced and since I would not be attending Christmas services with my family in Texas, I decided to take in the show.

I'm not a great lover of commercial Christmas music, but I do love sacred music and I'm interested in Celtic music.   This was a combination of all at the Madison Avenue Presbyterian Church.

The beautiful church was filled with patrons of all ages, many of whom seemed to know each other and even more impressive and festive, were decked out in gorgeous Scottish kilts and clan tartan.  The Pipes of Christmas event was produced by Clan Currie Society to both celebrate the season and raise money for its music scholarship.

Emotional tributes were also made.  The Scottish Great Highlands Bagpipe was originally a part of military regiment.  Therefore, the afternoon was dedicated to the late Private Bill Millin, the D-Day bagpiper who piped during the Normandy Beach Invation on June 6, 1944.  Two gentleman in attendance were asked to stand to be recognized for their own service during World War II.  Additionally, any person who had served in the military at any time was asked to stand and be recognized.  It was  inspirational to look around the church and see so many standing.

The afternoon's music included Highland Cathedral, Joy to the World, Bha Buachaillean an Duthaich Shear, I Wonder as I Wander, Medieval Fanfare, In the Bleak Mid Winter, Oidhche Shamhach (Silent Night) among others.  For the finale, all of the ensembles joined together to play a rousing "Scotland the Brave."

It was great fun to celebrate in Celtic style, especially since I have a few drops of Irish and Scottish blood in me.  I have signed up to be notified of the 2011 concert, which will be the 13th annual production by the Clan Currie. 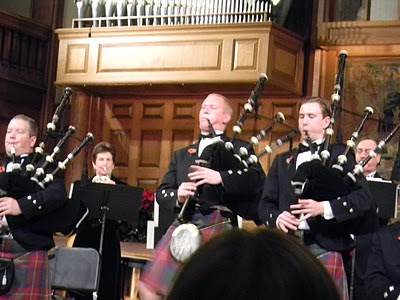 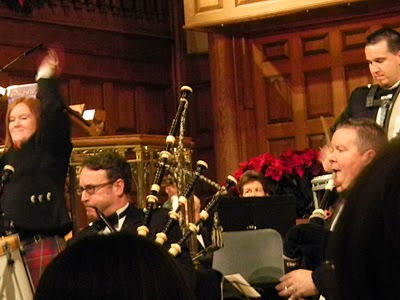 Yes, that's a great show. I've been several times -- both in NYC and NJ.

Just a quick note to let you know that the "Pipes of Christmas" is returning to NYC this December on the 17th & 18th with performances at 2pm.

Please help us spread the news.