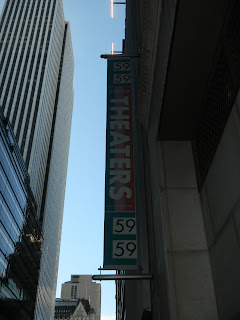 On Sunday morning, before I went to the office, I was catching up the tweets of my friends.  I was intrigued especially by Adam Rothenberg's tweet linking to his interview with Leslie Hendrix at his wonderful blog Adaumbelle's Quest.

Anybody who reads my blog regularly knows that I'm a Law & Order devotee.  One of the greatest things about living in New York where the original (and still Law & Order SVU and Law & Order Criminal Intent) filmed is the opportunity to see many of its amazing actors on the stage.  Leslie Hendrix plays "Rodgers," the dry medical examiner.

When my boss dismissed me for the day, I printed a BroadwayBox.com discount for The Body Politic and took advantage of the proximity of 59E59 Theatres to my office building, a mere block away.   I could have gone home to rest, but nothing is more relaxing to me than losing myself in a dark theatre for a few hours.

What I expected to be a political drama turned out to be a much needed light romantic comedy about the behinds the scenes of two presidential campaigns.  The cast Matthew Boston, Eve Danzeisen, Brian Dykstra, Leslie Hendrix, Daren Kelly, and Michael Puzzo.

I was completely charmed by the opposites-attract scenario between two of the staffers, the manipulation of each other and their candidates and co-staffers, even cross-camp manipulations.    What starts out as just an attraction leads to more in the end, on several levels.   The characters are funny, including the two presidential candidates, one clearly a Southerner.   There is a really funny bedroom scene, that's pretty sexy too. Leslie Hendrix plays a tough, sharped tongue professional and she's fun to watch in action.  It's a look at the right and the left, ideological differences and even how things really aren't that different between the two parties.   The ending was so sweet and unexpected that I even dab my eyes.

And guess what?  No surprises, I'm sure, that most of the cast has been on Law & Order.  The Body Politic, written by Richard Abrons and Margarett Perry, who also directs, is an At Hand Theatre Company production.  The play runs is a through March 6th at 59E59 Theatres. 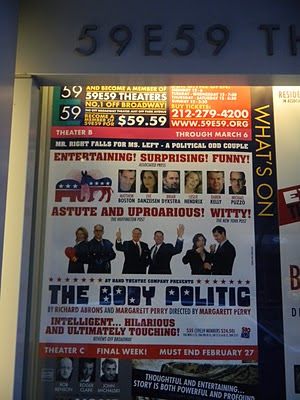 Email ThisBlogThis!Share to TwitterShare to FacebookShare to Pinterest
Labels: 59E59, Law and Order