On Saturday night, we were back at The Allen Room for another Broadway Baby in Lincoln Center's American Songbook Series.   This time the Broadway Baby was Kate Baldwin, large with baby herself.   Joyfully, Kate is seven months pregnant with her first child with husband Graham Rowat.

Kate built this show around the fact that she is an expectant mom and that life is taking her in a new direction, including a move from the Upper West Side to Brooklyn.  She shared her worries about whether she'll be a good mom, be able to maintain her career and her voice, and especially if the baby will like sports rather than musical theatre. Kate has a wicked sense of humor and she accentuates her point with a devilish laugh.   Beautiful and smart, she is an entertainer who enthralls with the sheer beauty and versatility of her voice.

The last time we saw her, she was concentrating on Burton Lane and E. Y. Harburg tunes.  She showed off her versatility at this show by throwing in a wide range of composers from Kern, Joel, Shire, Sondheim and even Lennon and McCartney.    It was always sweet and sometimes slightly naughty.   She opened with "Something's Coming," from West Side Story  - with a wink and nod to her baby belly.   Who knew those lyrics could be so funny?

The evening offered sublime ballads, as well as silly ("Sesame Street Medley: by Jeff Moss tailored for her new neighborhood) and even a little shock and hilarity ("Fuck Was I" by Jenny Owen Youngs, which was worth hearing only if for Karigee's laughter).   Other songs were, "Haven't We Met" (Rankin), "Hey, There and Everywhere" (Lennon and McCartney), "The Boston Beguine" (Sheldon Harnick, with whom she's sharing the stage next month at Feinstein's), "My Boy / Now I Have Everything" (Kern, Harnick, Bock), More (Sondheim), Warm All Over (Loesser), Have Feet, Will Dance (Fields and Lane, and incidentally my favorite tune from Kate's fantastic solo album Let's See What Happens

She encored, and ended the evening perfectly, with her signature song, "How Are Things in Glocca Morra?" from Finian's Rainbow.  All I know is that she is going have one lucky baby if she sings him lullabies.
I'll be at Feinstein's next month to see her with Sheldon Harnick - how can I miss the joy she shares?  She's one of my favorites and I love that we're having so many opportunities to hear her sing, even if it's not currently in a Broadway show.

I thought the Feinstein's show might be the last time I would have to hear her until she returns from maternity leave but last night, I came home to find a mailer advertising another chance to hear her in something that will really show off her versatility - Joan of Arc at the Stake, a dramatic oratorio by Arthur Honegger based on Paul Claudel's poem, with Shuler Hensley and The Little Orchestra Society.  It's at 7:30 pm on March 21st at Alice Tully Hall.   See you there! 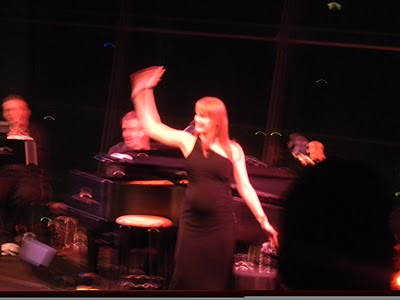