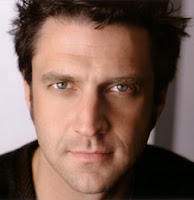 There was a full moon over New York City last night and it was impossible not to get caught between it and Raúl Esparza in the beautiful Allen Room of Lincoln Center Jazz in the Time Warner Center.   It's a room that boasts both beautiful acoustics and a beautiful view of Columbus Circle and the southern strip of Central Park.

Surrounded by Cuban percussion section, horns, strings, guitars and piano, Raúl Esparza opened his American Songbook concert with Cole Porter's Begin the Beguine, a quintessentially American composer's music set to a Latin beat.
It set the tone of the joy of music that was to come.

Raúl, a first generation Cuban American, was raised in Miami to parents who immigrated to Delaware from Cuba in the 1960s.  He shared his heritage of Cuban music with a mix of Broadway, which has become his career.    While he was dancing beautifully on the stage, he had us dancing in our seats to salsa and bossa nova beats.

He pointed out that while this music has roots from Cuba, Dominican Republic, Puerto Rico, etc., it was made famous and sustained right here in New York.   He paid much homage to salsa greats, especially Celia Cruz and
Benny Moré.     Latin songs included in the set were "Sabor a Mi," "Quimbara,"
"Mata Siguaraya," "Drume Negrita," "Yo Se Que Te Amare," "Wanda," and "Dolor y Perdon."   He was smoking hot on these tunes.   I wanted to rush the stage and dance with him.   I would love to hear him do these again and I was not alone, as evidenced by the gentleman who yelled out, "Hey Raúl, how about a Cuban album?!"  He said maybe he would, with this band.

He didn't disappoint his Broadway fans when he also paid homage to Stephen Sondheim as well and including songs from other shows he appeared in, including "Come to your Senses" from Tick Tick Boom and "Petrified" from Taboo.    From the films Reds and Dick Tracey, he performed Sondheim's "Goodbye for Now" and "What Can You Lose?"   He thrilled the audience with thrilling performances of "Marry Me a Little" and "Being Alive", the former of which brought us to our feet.

He did two sold-out sets - Kari and I went to the 10:30 set.   Raúl, funny and with killer good looks, brought humor and just the right amount of auto-biography to this show, sharing his heritage and love of performance.  His band was fantastic - at least three percussionists, two of whom were only on bongo.  The band leader, also on guitar was a handsome gentleman who danced along to the music as well as he directed.   There were also a backup singer, two pianists, two trumpets, a flute, trombone, saxophone and violin, a cellist and a stand up base.

One of the pianists was Mary-Mitchell Campbell, serving double-duty as Raúl's music director.   A brilliant orchestrator, Mary-Mitchell is also one of the only women conducting a Broadway orchestra and is now at the helm of The Addams Family.   She is also the founder of Artists Striving to End Poverty, or ASTEP, of which Raúl sits on the Board of Directors.


The next time I see Raúl will be in the Broadway revival of Tom Stoppard's Arcadia, which begins previews on February 26th.  In fact, he ended the party last night around midnight so he could report for rehearsals for his "day job" this morning.

I've always enjoyed Latin music and have been listening all day to these songs introduced to me by Raul just to keep that sweet feeling of last night going. It was a perfect evening of music and laughter and I danced my way home with a smile on my face.
at 3:23 PM

Wow, sounds like such an incredible night! I am VERY jealous, but am happy to have received this recap. I gave this to my mom to read and she is beside herself that she wasn't there, haha! I would definitely be in support of ANY album he puts out!