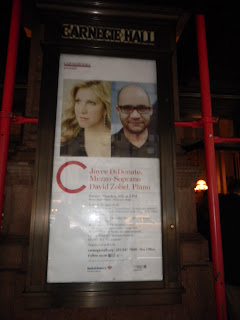 Today we spent a rainy afternoon in the heavens of Carnegie Hall with the very warm and wonderful mezzo soprano Joyce DiDonato, who was making her solo debut.

This was the second time I've heard Joyce in recital and I couldn't wait to hear this Carnegie Hall debut.  Having heard her also at Tucker Galas, the Marilyn Horne Birthday Gala and of course at the Metropolitan Opera, I knew that was I in for a very special afternoon.  Like the time first time we heard her in recital, almost 3 years ago exactly at Lincoln Center, David Zobel accompanied.

Joyce's voice is full of joy and fairly sparkles, her timbre like a trumpet.   Her program, mostly French and over two hours, was full of the expected Rossini, but she also thrilled with Haydn, Buzzi, Peccia, Loeneavalo and Di Chiara.    As evidenced by her blog and her tweets, Joyce makes educated and emotional choices of the music she shares.

She noted that after Rossini retired from writing operas, he often had a salon on Saturday nights at his home in Paris to showcase his new songs he had written during the previous week.  She said that the tradition of recitals began with sharing songs like this in people's living room and what was Carnegie Hall but a very ornate living room.

The loveliest pieces she sang were a set from Cécile Chaminade, a French composer who just happens to be a woman.   Joyce said she chose these a year ago believing that New York would need some spring about now...little did she know!   These songs, Come! My Beloved!, Villanelle, Morning Song, The Summer, were transportive.

Carnegie Hall also granted her a song cycle commission, which she did with composer Jake Heggie and Sister Helen Prejean.  It is called the Breaking Waves and I really hope she is able to record it for posterity.  It is absolutely lovely with four songs - Advent, Darkness, Music and Return.  Sister Helen's text was inspired by her love of surfing - Joyce noted that Sister has poster of surfers on her walls.  When she finished, Jake sprinted from his seat in the orchestra to the stage where he engaged Joyce in a long, loving embrace.  There clearly is a mutual admiration society with this singer and composer.

Joyce's encores were (Cherubino), Tanti affetti from Rossini's La donna del lago (which we heard her sing at the Marilyn Horne concert) and finally Somewhere Over the Rainbow.  She prefaced her final encore with the anecdote that her father was no fan of Judy Garland but he eventually admitted that this was a pretty good song.  She also pointed out that many of her fans are "Friends of Dorothy" which got a huge laugh.   The best thing she said was, "Music teaches us what is possible."  Her rendition of the song was tender yet soaring.

The program makes no note of the designers of Joyce's gowns or jewelry, but I am here to tell you that she appeared impossibly glamorous and beautiful.  Her first gown was a full black gown studded with gold sparkles.  Her second gown, pictured below, was a strapless bright red or fuscia.  She was dripping in diamonds!  We spotted Lawrence Brownlee, in the audience and she shouted out to him from the stage, and Terrence McNally, the playwright and librettist of Dead Man Walking. 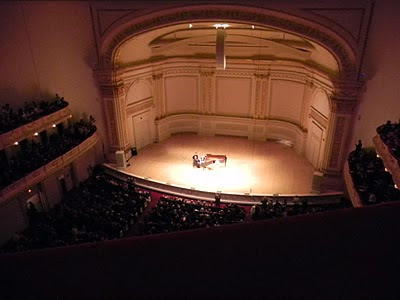 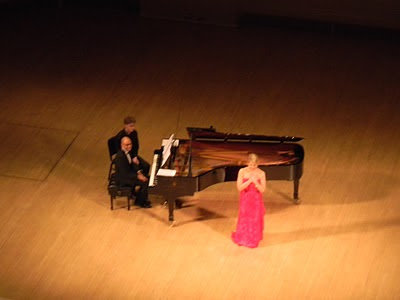 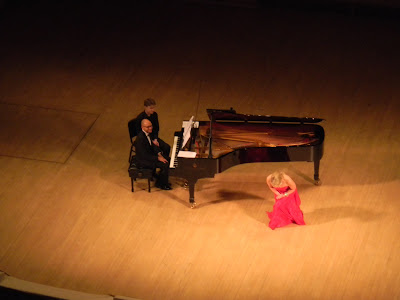 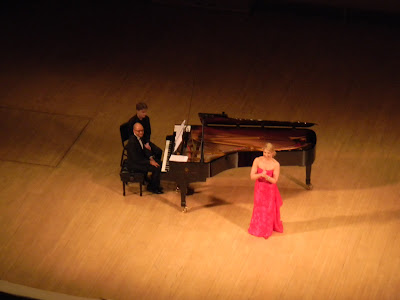 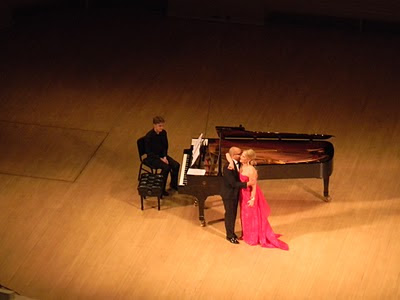 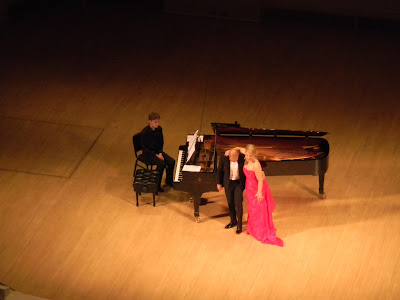 Brava! Sounds like a lovely afternoon. And I'm terribly sorry I missed the part where you spilled your wine on Sally.

And, as if that weren't enough, she then turned over a glass of water on me. Dine with Sarah at your own risk.

It was a wonderful concert indeed, despite the pouring rain awaiting us when we left the Hall. DiDonato was gorgeous to see and gorgeous to hear. What a pleasure - I am so happy I was there.

Joyce DiDonato continues to intrigue and amaze me. I am so enamoured with her remarkable grace and humility as well as her gorgeous talent and knowledge of her art. Flawless, charming creature.