Seance on a Wet Afternoon at New York City Opera 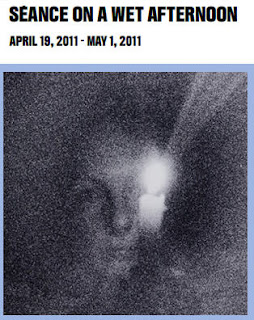 On Tuesday night we saw Seance on a Wet Afternoon at New York City Opera.  It's the New York premier of the new opera by Stephen Schwartz.

Stephen Schwartz is known for his musical theatre work, particularly Wicked, Pippin, Godspell and The Baker's Wife.    I find these musicals to be rock/pop style so I was interested in hearing what the self-proclaimed opera fan would compose for this piece.

Seance is lush and gorgeous.  The accompanying score is always beautiful and at times even reminded me a bit of Leonard Bernstein with its use of accentuating percussion.

Some may argue that Seance is not an opera, but what made it that for me is the fact that it is mostly sung-through, that is to say that dialogue and feelings are sung instead of spoken.    The second act did feel a bit more like musical theatre - stop, wait, let me sing a song here to convey my feelings or tell the story - but it didn't hurt the piece for me.  The show was compelling, transportive and highly entertaining.

It's based on the 1964 film noir of the same title starring Kim Stanley and Richard Attenborough. The story is about a medium who has the idea to abduct, or rather "borrow" a little girl and then aid in the rescue efforts in order to boost her fame as a successful medium.    She enlists her weak husband to do her bidding.    Unfortunately, her efforts do not go as planned and their lives spin out of control.    It's a perfect story for musical or opera.   The opera is set in the 1960s.  It is directed by Scott Schwartz, Stephen Schwartz son, who is also making his opera directing debut.   The set designed by Heidi Ettinger is evocative of rain and the house is rather transparent, giving it an ethereal, spooky feel.

Given the subject, I thought the score might be a bit more noirish or spooky, but rather it was more melodic and lyrical, while the libretto had a more suspenseful and dissonant tone which gave it an interesting dichotomy.  I was thrilled to hear soprano Lauren Flanigan in the starring role of Myra and Kim Josephson in the role of her husband Bill.   Schwartz wrote the role of Myra for Flanigan and she sang and acted it powerfully.   A wonderful bonus was hearing Melody Moore as Rita Clayton, who played the mother of the little girl.   She stole the show vocally.   Rounding out the principal casts were Todd Wilander as Charles Clayton, the father of the little girl, Michael Kepler Meo as Arthur, Myra's control and son, Bailey Grey as the little girl Adriana Clayton, Philip Boykin as Inspector Watts.   The young singers Michael Kepler and Bailey Grey both did a wonderful job acting and singing their roles.