Deborah Voigt with the Collegiate Chorale at Carnegie Hall 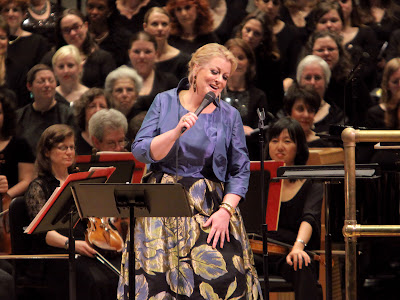 It was a grand night for singing at Carnegie Hall tonight.  The Opera Diva Deborah Voigt left her spear and shield back at the Metropolitan Opera and got her Broadway on tonight with the Collegiate Chorale in an all Broadway program directed by Ted Sperling.   Tony winner and opera singer Paulo Szot joined in as well.

Beautifully attired in a blue jack and full floral skirt accented with gold, black and blue, the Diva revisited her roots and the repertoire of her high school years with Broadway tunes.   She noted that "it was good to be among the mortals"it was good to be on a stage that wasn't moving - a tongue in cheek nod to "the machine" at the Met Opera where's she fabulously sang Brunnhilde in Wagner's Die Walkure.  I had a hard time wrapping my mind around the fact that I just saw her on Saturday at the Met in this role - one of the great opera sopranos of our time is stepping out to sing a little Broadway.  And sing she did along with a full orchestra and the 180 voices of the Collegiate Chorale.

As a follower of Deborah's on Twitter  and seeing her has hostess of the HD broadcasts from the Met Opera, I've come to believe that she is charming, witty and warm as well as sublimely talented.  I have seen her in a number of roles at the Met as well as performances in the annual Tucker Gala concert and recital at Carnegie Hall.   Tonight's program was a chance to see a whole different side.   In fact, Deborah began her singing career in high school musicals and will even take on the role of Annie Oakley in Annie Get Your Gun at Glimmerglass this summer.

The program was a nod to all of the soaring and glorious music of the American Musical Theater.   Sets included roles she sang in high school - including Agnes Gooch  from Mame...she said she auditioned for Mame but received the first of many rejections so was offerered the role of Gooch, which is still her "mother's favorite of all of her repertoire."  This she shared with deadpan delivery.

While the chosen songs were a bit predictable - big soprano voice set to soaring orchestrations - it was crowd pleasing and thrilling.  Highlights of the evening were "Oklahoma" with the hokey intro with Paulo Szot and the full chorale which had the audience dancing in their seats; a preview of Annie Get Your Gun, again with Paulo and a gorgeous "They Say It's Wonderful" and a very funny "Old Fashioned Wedding;" a stunning rendition of "Losing My Mind" from Follies; and a thrilling set from Porgy and Bess sans microphone - Deborah's "My Man's Gone Now" was gut wrenching and gorgeous; and finally she knocked it out of the park with "I Could Have Danced All Night" from My Fair Lady.

Even though Deborah left her shield and spear back at the Met, she took the opportunity to call out "Hojoto" as much as possible, which was at once thrilling and hysterical.   This Diva could certainly have a career as a musical theatre goddess in addition to ruling the opera stage.

Encores:  I Can Do Anything You Can Do, I Can Do Better and a reprise of Oklahoma 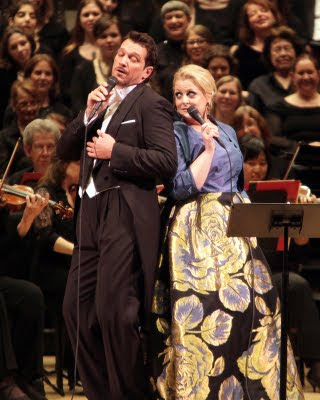