COMPANY on the Big Screen 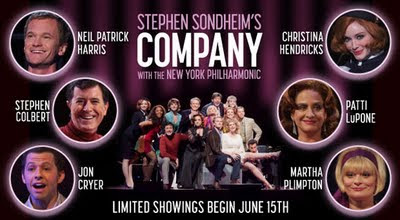 Wow!  We saw the film of the concert of Sondheim's COMPANY with the New York Philharmonic on the big screen last night.   I loved it!   I didn't attend the live concerts back in April - I had actual company and I just wasn't interested enough to spend the big bucks they were asking, based on my previous experience of seeing the revival on Broadway.  However, the film was fantastic and for only $18, it was a steal!    The cast was absolutely fantasic - each one was a comedic and vocal powerhouse.

It's on again tonight, the 19th and the 21st at theatres across the country. A list of theatres and links for purchase is here.