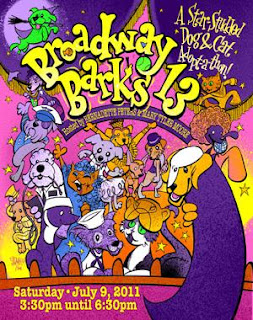 Yesterday, the eve of Broadway Barks 13, was one of the hottest, swampiest, rainiest days of the summer in New York City.   I just happened to run into Bernadette Peters at a restaurant and asked her if the show would  go on, considering the weather.  She was quick to assure me that the weather would be perfect!  I think she's right - today is turning out to be beautiful - in the 80s with sunshine and low humidity.

Bernadette Peters, along with Mary Tyler Moore, is the founder of Broadway Barks.  Broadway Barks promotes animal adoption and raises money and awareness for no-kill shelter animals.   Over the last 13 years, 1,000s of pets have been adopted and millions of dollars raised in support of pet adoption and no-kill shelters.  Bernadette works tirelessly, even taking time to visit animals at these shelters and helping some to find them temporary shelter in order avoid euthanasia.
Today the tradition continues in Shubert Alley in the heart of Broadway - it's the alley between 44th and 45th Streets, just west of Broadway.    At noon, Bernadette will be signing her two best-selling children's books, Broadway Barks

and Stella is a Star