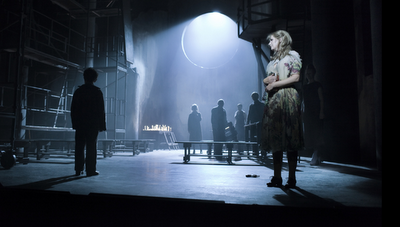 On a whim, I bought a ticket for last night's one night only performance of Selma Jezková.  As part of the Lincoln Center Festival, it was staged in the Rose Theatre, which was a perfect venue for this fully staged event.  It's the opera of the story from the movie Dancer in the Dark by Lars von Trier.   I thought I knew the story, which is a young woman who is going blind and is sacrificing all to save the sight of her son, who has the same disease, but I was not prepared for this emotional downpour.

The movie is strangely horrifying and delightful all at once  - it's terribly tragic yet uplifting in Selma's optimism and self-sacrifice.   In the movie, Bjork played Selma.   She scrimps and saves in order to have enough money for her son to have an operation to save his sight.  Her landlord, Bill, attempts to "borrow" her money but she is so desperate to save her son's sight, a struggle with a gun ensues and she shoots him.  He begs her to kill him to take away his misery, so she does.  She is simple and sweet and so devoted to her son, it's hard to know if she is really guilty of murder or just defending her own desperation.

The opera is by Danish composer Poul Ruders, with libretto by Henrik Engelbrecht. .   He completely captured the spirit and emotional intensity of the film in the music, which is sometimes stark and jarring and sometimes joyful.  Ylva Kihlberg sang the role of Selma.  She inhabited Selma with an aching fierceness and sang with a gorgeous strong soprano.   Additionally, Palle Knudsen was Bill, Hanne Fischer was Kathy, Gert Henning-Jensen was the District Attorney and Johanne Bock was Brenda, the prison matron.   Henning-Jensen was stunning in voice and acting.   Carl Philip Levin very effectively played her son Gene, in a non-singing character.

The opera, at only 70 minutes, is an abbreviated version of the film story.   We do not get to see much of Selma's love of musical theatre, although Ruders did manage to put in a few lines from The Sound of Music and does make her love of it clear.   Also, there's no "Jeff" nor is there time to even develop much of Selma's relationships with Kathy or even Bill.

When the curtain rose, the scene was already set - a funeral in a church, with Selma already in an open coffin. The orchestra tuned briefly and then there were at least 2 to 3 minutes of complete silence before any action or the orchestra played another note.    I have never heard an audience grow so quiet so quickly.    Finally in all of that silence and stillness, Gene walked to the coffin and pulled Selma into a sitting position and embraced her.   She then came alive and the scene subtly changed to the factory where Selma worked as a metal presser.

Each scene moved quickly into the next, but it didn't feel rushed.   Even with this quickness, the murder of Bill seemed to last forever, with very little music playing except for punctuation from the orchestra.  The trial was stunning and heart-wrenching, mostly because Selma simply will not divulge the truth about Bill and the money.   At the back of the stage during this, there was a projection of a large blinking eye.  It was terrifying.
The real terror came on Selma's final day alive.   In the film, there is an incredible scene when she is attempting to be oblivious of her fate, already almost completely blind, and singing from The Sound of Music. Here she does have a meeting with Kathy who desperately tries to convince Selma to tell the truth, while Gene is lingering on the outside, all of his pain of losing his mother so evident.

The final scene was shocking, sickening and so terrifying on so many levels.  I have never been so emotionally wrought in a theatre.   The prison guards actually took Selma up to a plank and put a noose around her neck. Intellectually, I knew that the actress wasn't really going to hang as she was hooked to a well-hidden safety harness, but emotionally, it seemed real.   After the most gut-wrenching and heart-rending aria I have ever heard in which she sings to her son Gene that they will always be together, she is pushed off the plank and just dangles on the noose.

Finally, she is lowered all the way into the coffin again and Gene is there to mourn.

The applause was loud and long.   The cast took many bows, along with conductor Michael Schonwandt and the composer Poul Ruders.   Incidentally, the Royal Danish Opera has been the principal institution for Opera in Denmark since 1748.  The Royal Danish Orchestra was started in 1448 and is the world's oldest orchestra.

I was on the edge of tears during the applause but could not hold it back.

After the performance, I was to meet Roxie outside of the theatre.  I spotted her and by the look on her face when she saw me, I knew what was written on my face and that I wasn't going to be able to hold it in.  I had to sit down on a nearby bench and just let it out, tears, sobs, heaving shoulders - the works.   I hate to cry and rarely do it, but this could not be avoided.  I was totally emotionally shaken by this performance.    In a way, I'm glad it was a one-night only because if it wasn't I would have to go back again and again and have to cry again.

The production in Denmark was filmed and is available on DVD.