Screening: Behind the Scenes Documentary of West Side Story 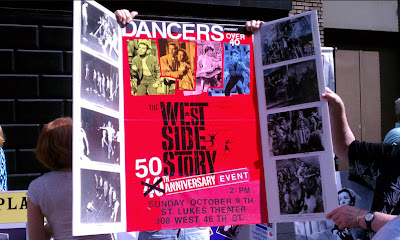 One of my favorite things about going to the Broadway Flea Market is visiting the Dancers Over 40 table to see Harvey Evans.    In fact, this year my favorite treasure of the day was the large photo of Gwen Verdon dancing in New Girl in Town, which I purchased  from the Dancers Over 40.  As I picked it up, Harvey confessed that he'd had his eye on it all day, and for good reason:  he made his Broadway debut in New Girl in Town.

Harvey is one of the nicest men on Broadway, and even in New York.  He's had an amazing career, beginning with his debut in 1957 to the Broadway revival of Oklahoma in 2002.   He also performed in shows regionally, notably as Buddy in Follies opposite Marilyn Maye, and danced and acted in a number of films, including Mary Poppins, The Pajama Game, Enchanted and the upcoming Silver Tongues.

Email ThisBlogThis!Share to TwitterShare to FacebookShare to Pinterest
Labels: Dancers Over 40, Harvey Evans, West Side Story