Hugh Jackman: Back on Broadway 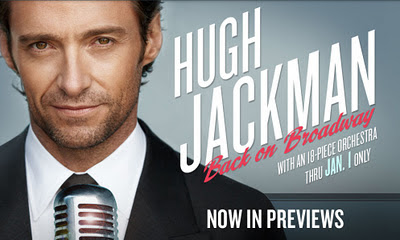 At 4:59 pm on Tuesday afternoon, I received a text message from my friend MrTylerMartins inviting me to the first preview of Hugh Jackman's one man show on Broadway.  How could I pass this up?   Tyler won the student lottery - first ticket drawn - two tickets for $32 each.   Fortunately, in this very busy week I just happened to be free for the evening.  Plus, it was an extra special treat to go with the very enthusiastic theatre-goer, Tyler.

I've been a big fan of Hugh's ever since I saw him in The Boy from Oz in 2004.  That year I also ushered at the Drama League Awards and I was the one to hand him his program and show him to his seat.  I swear could have died from swooning!   I like his movies fine, but his stage charisma is out of this world:  he's a looker, he's hot stuff in the steps department and he chirps like a bird.   His voice is warm and powerful.     When I heard that he would be putting on a one man show in San Francisco and then Toronto, I immediately starting wishing that he would get a Broadway run.  Voila!  Wish came true.   Apparently, it has been his wish and dream too.

Even though he's a man's man, he grew up watching movie musicals on Saturday afternoons after rugby practice in Australia.  He was the star of the West End's Oklahoma! before he even made it to the role he's probably most known for at this point, "Wolverine" in The X Men.

It's an old school fabulous show (my favorite) - big band on stage, singing/dancing girls, stories, chatting with the audience jokes and costume changes.  His act is like a combination of Liza and Bernadette with extra sparkle and possible was somewhat like the old shows that Sinatra and the gang used to put on in Vegas.   He combines show tunes, songs from movie musicals, a few standards and some very, very special elements that you'll have to experience for yourself.    The house was completely full and when Hugh took the stage, I have never heard a roar like that in the theatre at a first preview (even Patti's Gypsy and [TOS]).   People were screaming and cheering (flashes of the scenes of the concerts of the Beatles and Elvis popped into my head).   Between the stories and songs, I was simultaneously crying, laughing and experiencing chills - my heart strings tugged with his rendition of Soliloquy from Carousel and my face hurting from smiling over his "Luck Be a Lady" from Guys and Dolls.  I'm getting chills again just thinking about it.

The show lasted close to 2 and 1/2 hours with an intermission.  Hugh was all over the stage and even spent some time in the audience and speaking to audience members.   He was warm, welcoming, charming and so handsome - he had the entire audience eating out the palm of his hand.   One example of the fun:  Hugh was explaining that even though he's losing weight due to all of this dancing, he is in fact in the midst of weight training in order to regain the physicality of "Wolverine" for the next film shoot; a lady from the audience shouted, "Prove it!"  He shouted back: "If you show me yours, I'll show you mine!"     Of course, the audience went wild!

This was only the first preview so I cannot even imagine how off the hook this show will be by the time it opens on November 10th.  In fact, this could have been opening night, only without any celebrities.   I'll be back to see the show again on November 15th with my college roommate and Karigee and I'm already counting the hours until then:  approximately 463 hours!

After the show, Tyler and I couldn't resist watching the stage door scene (from across the street since it was impossible to get close otherwise).   Frankly, I had so much fun at the show, I just didn't want to leave!

Pictures from the evening:

I am so glad you were able to join me! As much as the show was TONS of FUN (so much that I've seen it twice, already, and plan on going a few more times), it was even more fun to experience it with you, Sarah!

I have been going to the Broadway theater since I was nine years old in 1958 and I had never seen a more fantastic, brilliant and generous male performer ever.
As I now live out of the country I can only envy those like you able to experience the joy a once in a lifetime entertainer can bring when he connects with an audience.