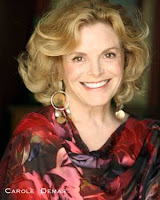 Carole Demas was the original "Sandy" in the 1972 Broadway production of Grease.  Other notable roles were as the original "Baker's Wife" in Stephen Schwartz The Baker's Wife and played "Luisa" in The Fantasticks for two years.  She has since appeared on television, regional theatre, and Broadway concerts, including last year's Broadway Originals at Town Hall, which I was lucky enough to see.   Tonight, I'm seeing Carole perform her cabaret act at The Laurie Beechman Theatre.