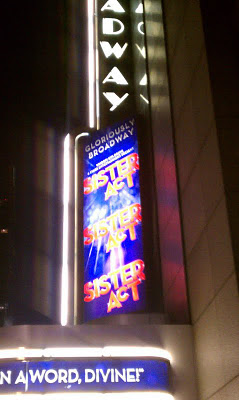 Last week I was treated to tickets to see SISTER ACT on Broadway by the show's marketing team.   I took my dear friend Maryann with me. I had a feeling that of all of my friends, she would be the one to really appreciate a show about Catholic nuns, especially since she grew up in Catholic schools, her brother-in-law is a priest, her cousin is a nun and her other cousin is a Brother.   I was right!  In fact, we both more than appreciated the show - we laughed until we cried!   I had to admit that I cried a little too just from loving the story and the show so much.
SISTER ACT is based on the 1992 movie of the same name, which starred Whoopi Goldberg (who is also one of the producers of the musical) as Delores and Dame Maggie Smith as Mother Superior.   It's about Deloris, a singer down on her luck who is placed under protection and into hiding at a convent after she witnesses her boyfriend commit murder.  She could not be more different than the nuns, whom she eventually comes to love as sisters of her own.   I loved the movie, which features songs from the pop hits of the 60s, but I didn't really care about seeing another "jukebox musical."   Turns out, there is nothing jukebox about this show.

SISTER ACT the musical is a great big Broadway show featuring the original music of Oscar winner Alan Menken.  The songs are in the genres of 70s disco, soul, funk and R&B all mixed in with Broadway style.   The lyrics are a clever, funny and touching while the beat often had us dancing in our seats.
SISTER ACT stars the wonderful Patina Miller as Deloris.  Patina originated this role in London's West End, where she was Olivier nominated and was awarded the WhatsOnStage.com Theatregoer's Choice Award for Best Actress in a Musical.  Here in New York, Patina was nominated for the Tony, Drama Desk, Outer Critics Circle and Drama League Awards and received a 2011 Theatre World Award.     She's got a warm, natural voice and just oozes charm all over the stage.  The show is full of anthem-like songs, but she has a song called "Fabulous, Baby!" that made me feel that it was written specifically for the actress, not just the character.  I want her to run in this role for a long time, but I also can't wait to see what she gets to do next.

The no-nonsense Mother Superior was previously played by Tony winner Victoria Clark, who recently left the show.   I was disappointed to miss Victoria, but currently covering the role is Jennifer Allen, who could not have been better.   Mother Superior is the "straight man" in this comedy and gets some really poignant moments as she tries to protect her domain and eventually opens her heart to Delores.   It's a beautiful role - and she gets to sing the most beautiful number in the show, "Here Within These Walls."    Carolee Carmello will be stepping into the role later this month.   The supporting cast is fabulous and its fun to see a wide age range of actors playing the singing/dancing chorus - even the "bad guys" were lovable.

Anytime you put nuns in the midst of a caper, hilarity is bound to ensue and there's no variation from this rule in SISTER ACT.    Besides the hilarity, it's downright pleasing to the eyes and ears.    Which each scene, I loved the show more and more.   By the final scene and even the fabulous curtain call, I was completely devoted fan of this show.  SISTER ACT literally and figuratively sparkles.  If a Catholic mass was this fun, I'd convert and be there every Sunday!

The original London cast album, which includes Patina, is available and I have been listening to it nonstop.  SISTER ACT plays at the Broadway Theatre, 1681 Broadway between 52nd and 53rd Streets.  Tickets are available online:  via Telecharge.  ﻿
at 12:49 PM