Rodelinda at the Met 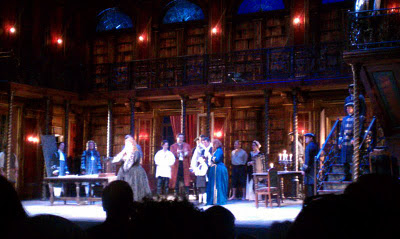 Oh Rodelinda of the Metropolitan Opera!  I can't believe you've already come and gone.  I saw you at the dress, in the HD and finally at the December 7th performance.  You were the first opera in which I saw Renée Fleming.  I saw you again in 2006.   Alas, my love for you knows no bounds.  Your arias - especially "Dove sei, amato bene," "Ritorna," "Io t'abbraccio"  and "Mio caro, caro bene" - cause my heart and soul to leap.  Seriously, "Io t'abbraccio" may be the most heart-rending duet in all of music.   And oh!  Your love triumphs over evil ending when the entire cast joins in on "Dopo la notte oscura" just had me dancing in my seat! One more thing - could you be better acted?  I think not, especially by Stephanie Blithe and Renée Fleming.

Will you visit us again?  I can only hope and dream...and wait for the PBS broadcast and hopefully the dvd.

[Like the icing on top, the evening was just as satisfactory as Rodelinda itself.   I've been working many hours at my day job, but was determined not to miss this one:  my boss said, "You may invoke the Renée Fleming exception."   We sat in $20 orchestra seats, courtesy of Sally's time waiting for Varis Rush Tickets.  After the opera, we visited Renée backstage who declared that this was the best performance yet.   I also talked to that famous opera fan Christine Baranski and was delighted to see my friend Michael Stinchcomb, whom I hadn't seen in many moons.  Sigh.  Perfection.]