Reeds and a Soprano at Carnegie Hall 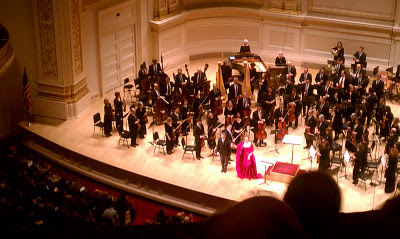 Sunday, January 15th, was one of the coldest days we've had in New York City in a long time (and subsequently hasn't been as cold since).  I think the windchill was around 4 degrees farenheit.

One of my favorite things about sitting in the family circle at the Met is being able to watch the orchestra at work.  Over the last few years, even though we're roughly a football field apart, my seat has been directly adjacent to principal clarinetist Anthony McGill.  I love to watch him at the back of the pit.  But seeing him strut his stuff on the stage at Carnegie.   He played the COPLAND Clarinet Concerto - actually, he played and danced the concerto.  Even Maestro Luisi got in the act with the choreography.   In fact, I found it hard to sit still as they joyfully worked thru the music.   It was glorious!

Clarinetist Stephen Williamson opened the concert with the MOZART Clarinet Concerto in A Major.   It was blissful.  It is played in one of my favorite movies, Out of Africa, and I was transported back in time when I was a teenager.  The movie had a very big impact on me and its soundtrack was among of my first introduction to classical music.

The main act of the day was my favorite soprano Renée Fleming.   She looked like a present in a beautiful deep pink satin gown.   Renée was in amazing voice and I have to say this was one of the her best concerts I have been to as of late.    I adored the Mahler cycle - her voice was full of emotion as it soared above the orchestra.   Even better, she sang Barber's "Give Me Some Music" from Antony and Cleopatra.   She treated us to an encore of  Previn's  “I Can Smell the Sea Air” from A Streetcar Named Desire.  It was so divine and really whetted my appetite to see her in the concert version of a A Streetcar Named Desire next season either at Chicago Lyric Opera or here at Carnegie Hall.