Rutherford & Son at The Mint Theater 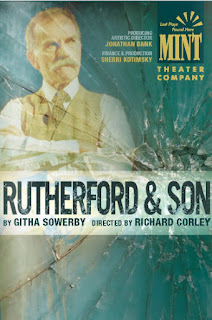 The Mint Theater has mounted the 100th anniversary production of Githa Sowerby's Rutherford & Son.   It is directed by Richard Corley and features Robert Hogan in the title role, as well as Dale Soules, David Van Pelt,  Eli James, Allison Mclemore, James Patrick Nelson, Sandra Shipley, and Sara Surrey.  Robert Hogan, Dale Soules and Daivd Van Pelt were all in the original production of Rutherford & Son at The Mint in  2001.
The play, set in the harsh environment of Northern England just after the turn of the century is about Rutherford and his three grown children.  He comes across as a tyrant but Sowerby subtly nudges him to be seen in different ways - a successful business man, a struggling business man and, or a man who simply wants more for his children.   His children cannot except his rules or unable to see his wishes for them and he is unbending in his attitudes and I found myself torn in sympathising with him.   The language of the play, presented in the unique dialect of Northern England,  lends to the time period.  Van Pelt was particularly good at the difficult dialect.

Vicki R. Davis is responsible for the set, which blends the past and present with period furniture and photos of the landscape on panels hanging on the edges.   The modern touch of the panels gave me a sense of the roughness of their plight - even though the family is socially superior because of their father's success, they are still enduring the harshness of the environment and time period.    Charlotte Palmer-Lane's period costumes were fine but the black crepe dress worn by Ann, played by Sandra Shipley, was particularly beautiful.  It was suitable for a woman of her station - a spinster playing the role of matron of the home.

Of the cast, Dale Soules, Sara Surrey and Martin Van Pelt stood out particularly.  Surrey played Rutherford's daughter, unwilling to accept her station in life.  She portrayed the young woman who was quickly advancing in age beyond her years with quiet heartbreak.  Van Pelt played the working man, considered a servant.  He played him humbly yet strongly.   Dale Soules, in her too brief scene, practically stole the show as the mother of a young man accused of stealing.  She received much deserved and enthusiastic exit applause.

Githa Sowerby first gained acclaim as a playwright in England with this play in 1912.  She broke through barriers when women did not have roles outside of their homes.   Rutherford & Son was slated to play only four performances at the Royal Court but after reviews, it transferred to an extended run in the West End.   Indeed, Sowerby is a powerful storyteller.

Rutherford & Son plays at the Mint Theater at 311 West 43rd St, 3rd floor, between 8th and 9th Avenues.   It is scheduled to run through April 7th.   Tickets are available online  or via the box office at 866-811-4111.   The Mint is one of my favorite off-broadway companies - they consistently mount evocative, beautiful productions of obscure dramas.   It is one of New York's jewels of off-broadway theater. 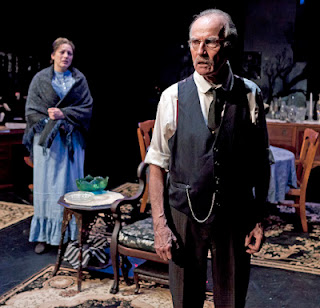 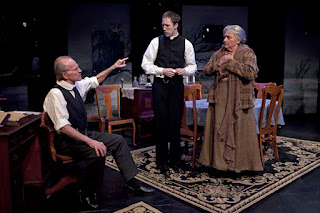 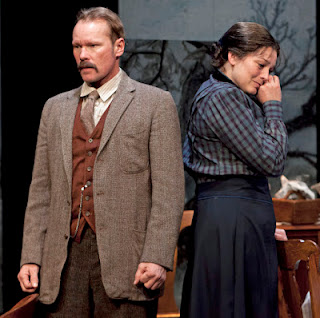