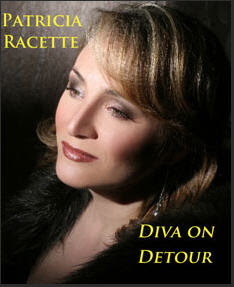 Last night I had the pleasure of attending the live recording session for Patricia Racette's upcoming cabaret album.

Patricia Racette is a world-renowned operatic soprano, known best for role as Cio-Cio San in Madama Butterfly.   I don't have supporting data, but I heard somewhere that she holds the record for singing Cio-Cio San in Madama Butterfly more than any living soprano.  I've been fortunate to see her Cio-Cio San a number of times at the Metropolitan Opera as well as Roberta Alden in An American Tragedy,  Elizabeth in Don Carlo, Alice Ford in Falstaff, Giorgietta in Il Tibarro, Angelica in Suor Angelica, Lauretta in Gianni Schicchi,  and Ellen Orford in Peter Grimes (also at the WNO).   She's one of my favorite performers and I consider her one of the best stage actresses around, in any genre.   Her performances are complete, emotional experiences that draw you in to the heart of the character.

For her cabaret, Patricia returned to her roots and her love of jazz classics and the American songbook.  She cut her teeth on this repertoire as a teenager when she would attend jam sessions with a group of "retiree dudes."

Her album, to be released by GPRrecords later this spring, will feature standards by Porter and Gershwin, some Piaf and even Sondheim, among others.    The live recording session was held at Sound Associates on 45th Street in Manhattan.  About 35 friends and loved ones joined Patricia and her accompanist Craig Terry in the studio.  It was intimate and felt a little like a cabaret club, without all of the trappings of a club, although we did sip prosecco.

Patricia's non-operatic voice is warm and inviting, even surprisingly low.  It has a smooth sound without the heavy vibrato of an opera singer.  She also interprets lyrics beautifully.  Alhough she's happily married to fellow opera singer Beth Clayton, it was her medley of sad songs that had us all swooning.    And because we were encouraged to participate in this live session, we'll be on the album too with our genuinely appreciative applause and cheers.

The album, Patricia Racette: Diva on Detour, is available for pre-order at GPRrecords.com.