A Little Love in Paris and London 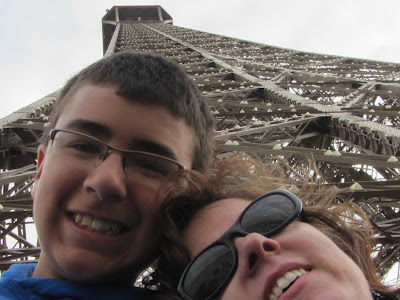 "Oh, what times we're going to have, my little love," says Auntie Mame to her nephew Patrick.  Those words have resonated with me for years.  My own auntly style is informed by own bevy of beloved aunts - Beth, Ethel Sarah, Gladys, Lillie Bell,  Rosemary, Georgie, Wilma, Diane and Dale - in addition to the one and only Auntie Mame.    I also live by the words of Mame, Jerry Herman's musical version of Auntie Mame, "Open a new window, Open a new door, travel a new highway that's never been tried before; Before you find you're a dull fellow, punching the same clock, walking the same tight rope, as everyone on the block. The fellow you ought to be is three dimensional, soaking up life down to your toes."

Thus armed with such advice and being one who has learned from example, I'm doing my best to open windows for my own little loves, Cody, Cara and Camilla.   Cody and Cara have both been to New York City (Camilla who is only 4 will get her chance soon enough).   This year, I decided to widen that door even further and take 13 year old Cody on his first trip abroad.

On July 5th, Cody successfully flew to New York by himself - from Midland to Houston to Newark, for the first time. We did a few New York things, including Coney Island, a baseball game in which we rejoiced in the Cubs walloping the Mets, and some walking in Central Park, before departing for Paris on July 7th.

In Paris, we stayed at the  "fancy" Hotel Caron de Beaumarche in the Le Marais, just blocks from the Seine and Il Saint-Louis.   We spent time doing all of the wonderful Parisian things one does - sipping cafe creme in cafes, munching on baguettes, floating on the Seine, and people-gazing.  We took the RER out to Chateau de Versailles (my first and last time) where we loved the gardens.  We saw most of the city from the top of a tour bus.  We stood in line for three hours and then finally a few hours at the top of the Eiffel Tower.  We visited Notre Dame.   We even successfully found ketchup, much to the amusement of a waiter.  By the end of our time there, Cody was just as polite in French as he is English. Best of all, we laughed and smiled and basked in the blissfully, cool Parisian weather.   I learned so much about this boy, only a teenager since June.  For the first time I saw him as the young man he is becoming with his integrity and smarts on top of his easy going nature and delightful, if sometimes wicked, sense of humor, which includes a multitude of vocal mimicking.

There were funny moments when Cody broke out into various accents, namely cockney, thick Texan, or Cajun.  He would try to fool me into thinking somebody was tapping me on my shoulder:  "I got ya!" he would yell.  He would also constantly try to photobomb.  Then there were those moments when he'd listen to my ipod and talk to me about music. He loved my Van Halen mix.   I listened to his ipod too.  Like me, he's developing quite a palate for the eclectic.   He would randomly break into song.  At the classical concert we went to, he called the violins "fiddles" and started singing, "If you're gonna play in Texas, you gotta have a fiddle in the band."  This kid kills me! 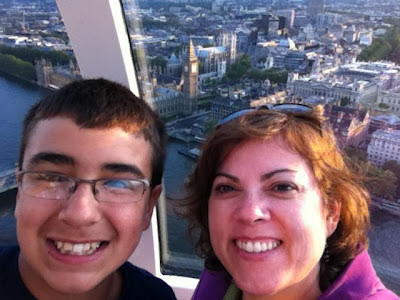 On Wednesday the 11th, we took the Eurostar under the English Channel to London.  This train travel was a first for Cody as well and it was quite enjoyable.   The time in London proved to be even more fun than Paris.   Since our visit fell between the Queen's Diamond Jubilee and the beginning of the Olympics, the city was decked through out with flags, both the Union Jack and of the nations of the world, and jubilee and Olympic posters.   I've always found London to be clean, but it seemed as if everywhere we looked, it sparkled even brighter.    Most days we were lucky to dodge light rain and rarely had to wait in lines.

Cody reveled in all things British - the taxis, the buses, the tube, the food, and the soldiers.  We stayed in Kensington at Base2Stay near the ultra convenient Earl's Court Road stop on the District Line of the Underground.   While Cody like our "fancy" hotel in Paris, he absolutely loved this modern spot.  We were in a bunk bed room and he cheered at all of the features of the sweet little room, exclaiming everytime we came in, "It's so cool!"

The first evening we walked right on to the London Eye without hesitating for a moment.  At first Cody was dubious about this slow ferris wheel, but of course ended up being thrilled over the view, just as I knew he would be.    We then enjoyed a walk down the South Bank before heading back to our "local" in Kensington to have Cody's favorite fish and chips.

We had a cool moment Royal post office where we went to purchase post card stamps.  The lady clerk got us to look at her book of Olympic coins and of course, we succumbed to a purchase to a pretty cool set of London souvenirs.  Cody was thrilled to learn that shooting is part of the Olympic games and we, of course, started dreaming of the possibilites of him becoming an Olympian.   Cody is a member of 4-H and is an excellent shot.

The next day we watched the entire Changing of the Guards at Buckingham Palace, visited Churchill's Cabinet War Rooms, attended Even Song at Westminster Abbey and a rainy boat ride on the Thames.

On Friday, we took a bus tour to Bath, Stonehenge and Salisbury Cathedral.  It was a long but enjoyable day.  The English Countryside was gorgeous and I loved spending that much quiet time on the bus with Cody.   His only real criticism of the entire trip came on this day and it was about Stonehendge, "I thought it would be bigger."  We had a delightful tour guide who kept us laughing as well, not that's hard for this easy natured boy or his aunt.

We had a longest, biggest day on Saturday. It started early at the Tower of London.   We beat the crowds and explored all of the nooks and crannies.  Cody loved all of the ancient and current military accroutement and I, of course, loved the Crown Jewels.  This was my fourth or fifth time visiting the Tower and I really don't tire of the romance and history of the site.   I really loved seeing it through the eyes of a 13 year old boy enamoured with military history.

After the Tower, we crossed the Tower Bridge to visit the HMS Belfast, the Royal Navy ship moored in the Thames.  We spent three hours climbing up and down ladders from bridge to engine rooms, from bow to stern.   Cody turned every knob and flipped every switch he could and loved every second of the exploration.

After yet another pub lunch, we tubed to Lambeth to visit the Impirial War Museum.   This site was also high on Cody's list of favorite spots.  The museum is chock-a-block with tanks and guns and memorabilia from many of Britain's past wars.  We even went through World War I trenches and a World War II bomb shelter.   Cody could have stayed at this museum for many more than three hours, but we hit closing time.

That evening, it was finally my turn for a treat (not that I hadn't already loved every minute):  we saw the West End production of Sweeney Todd at the Adelphi Theatre.  Michael Ball was "Sweeney" and Imelda Staunton was "Mrs. Lovett."  I loved "indoctrinating" Cody and he in turn loved telling all of fellow audience members, ushers and souvenir man that it was my 26th time to see a production.   Of course, I loved the show most of all because Cody loved it, even though there was nothing revelatory about the production.   Cody said, "I see why you love this show."   He spent the following day singing bits of the songs, even hiliarious changing certain lines to "There was a farmer and his wife...there was a mailman and his wife...etc."  A riot! 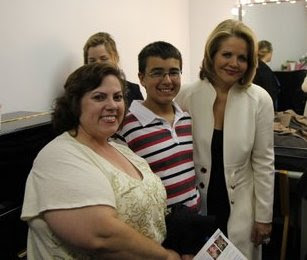 On Sunday, we recovered from our long Saturday with some shopping before meeting my British friend Darrell for a brief tour of Convent Garden before heading to the Barbican for the London Symphony Orchestra's final concert of the season, featuring Renée Fleming.   I was a bit worried about Cody being able to sit through the program, difficult even for an adult, but of course, in his true brilliant fashion, he passed through it with flying colors.  I do believe he loved the Stravinky "Petrushka," especially since he is a cornet player and the piece features so many different sounds, including trumpets.  His only question was, "Why is she singing in French?"  We met other fans of Renée's, from Great Britain, Holland and Austria.  I loved exposing all of this culture Cody.  After the concert, we headed backstage to meet La Diva.  I did indeed feel quite proud when Cody shook Renée's hand.  I think he enjoyed the evening and I couldn't have been prouder of him and of the experience.    Afterward, we were treated to a ride home from my friend Suzanne in her very interesting little car, which fascinated Cody.

Our trip came to an end all too soon early the next morning.  After tubing out to Heathrow, we discovered that our direct flight to EWR on United was cancelled.  We were able to re-book on an Air Canada flight to Toronto then back on United Express to EWR much later than planned.  I was initially annoyed at the change, but leave it to Cody to be excited - he was in three countries in one day.

Traveling with my wonderful thirteen year old nephew was one of the great experiences of my life and I can't wait to do it again.   Cody already has plans for us to somewhere else - he's dreaming of Japan.   I said, "We'll see"; but, truth be told, I'd jump at the chance to do it all over again.   I hope that I opened that window for him, as well as his heart and mind.   At least I have two more chances to do this again with two other little loves Cara and Camilla when they finally turn thirteen and frankly, I'm already counting the days until we depart.

Hi Sarah,
I really loved your article. Your experiences sound amazing, I am sure your nephew will never forget the great time he had with you! It makes me wish that I had an aunt like you ;-)...

All the best,
Raphaela

What a marvelous auntie you are! I can hardly wait to visit you in your townhouse on Beekman Place.

Sarah, you are the best aunt ever and I say this as someone who has always taken great pride in her own auntieship. Cheers, jan