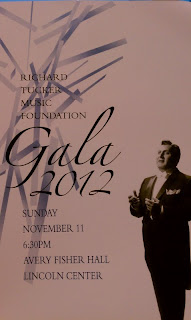 Every evening of every August, I hold my breath while I check my mailbox. I know that it will be there soon.  It is The Invitation from the Richard Tucker Music Foundation announcing its annual gala concert.   This year, it arrived the very day after our Mayor Michael Bloomberg proclaimed Richard Tucker Day in New York City.

This will be my sixth annual attendance at the gala concert and it is by far my favorite event of the classical season in New York.  It brings together opera singers from around the world for an evening of surprises, chills, thrills, and above all, vocal fireworks.

The gala concert is an annual concert to raise money for the Richard Tucker Music Foundation. The Foundation, named after the great American tenor, was founded as a "non-profit cultural organization dedicated to perpetuating the artistic legacy of the great American tenor through the support and advancement of the careers of talented American opera singers by bringing opera into the community." Each year the Richard Tucker Music Foundation awards cash prizes to individual U.S. born singers. There is no application process, only nomination.

Whereas: The life of the Metropolitan Opera's legendary Richard Tucker is a true New York story; it stands as a testament to the promise of opportunity for all in the city that was his home. In that spirit, we’re pleased to honor his memory and join in celebrating the life and legacy of Richard Tucker.


Whereas: Born Rubin Ticker in Brooklyn to Romanian immigrants, Richard Tucker began his vocal career as a cantor at the Brooklyn Jewish Center, and eventually earned the attention of the general manager of the Metropolitan Opera. After a successful audition, he became the Opera’s lead tenor, and went on to star in 724 performances that also featured many of the greatest opera singers of his time. Millions of fans worldwide also thrilled to his appearances in concert halls and on radio and television, and continue to enjoy recordings of his beautiful and expressive voice. Since his untimely death in 1975, the Richard Tucker Music Foundation has built upon his artistic legacy by supporting the careers of emerging artists in the world of opera, and today's event, in recognition of what would have been the great tenor's 99th birthday, is an opportunity for all New Yorkers to come together in celebration of excellence in opera and the performing arts.

Whereas: Richard Tucker's story is emblematic of the values that we, as a City, hold dear, and we're committed to preserving our well-deserved reputation as a place that embraces talent, hard work, and dedication. We share the Richard Tucker Music Foundation's commitment to excellence in the arts, and are glad to join in celebrating the life and legacy of a truly inspirational New Yorker. 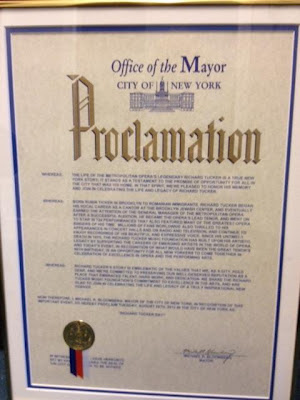