GIANT at the Public Theater 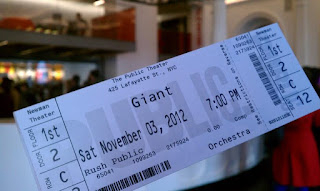 Actually, it was Karigee who told me that Graham Rowat tweeted the news.   So, I got up early and journeyed downtown.  It wasn't exactly an odyssey, but thanks to the city still being in hurricane recovery mode, it did take about an hour and half and involved a cross-town bus, a limited subway ride and cab ride.   The people at the Public are awesome and welcoming, so I was able to shelter inside while others slowly arrived for the noon time ticket giveaway.   The Public only regained electricity just after 5:00 pm on Friday.

Although this is the third incarnation of the show - first at the Signature in Arlington, VA, then at the Dallas Theatre Center early this year, GIANT is still in previews in New York.  It opens next Thursday, November 13th and is scheduled to close on December 2nd.    If the critics love it as much as last night's audience, then it is sure to get an extension.  Dare I dream of a Broadway transfer?  I hope so.

Overall, the cast is brilliant.  I loved seeing Kate in another leading role and she is indeed resplendent in this.   It was so good to see Michele Pawk and John Dossett on stage again.  This is the best show in which I've seen Brian D'Arcy James.   I was so blown away by Katie Thompson as Vashti - where has she been?  What a set of pipes!     In fact, the entire cast is chock full of great pipes and it's beautifully sung.

As a Texpatriot and one who has had family members who were ranch hands and ranch owners, any annoyances I harbor are just nitpicking are mostly just about costuming on the men.   The good far outweighs the bad and I loved the specific little Texas things - Michele as Luz mentions "Sonofabitch stew" (aka menudo), Mike the cattle lobbyist wears a Texas Longhorn tie,  and there's a history lesson about the Alamo.  I couldn't help but burst some Texas buttons.

The show does that that epic, everything is bigger in Texas feel, and it's allowing the cast, especially Kate shine brighter than the Lone Star.  The whole show is beautiful and I can't wait to see it again in a few weeks.
at 5:18 PM

Loved this show at the Dallas Theater Center, with Aaron Lazar as Bick, Dee Hoty as Luz, and Matt Doyle as Jordy. Yes, Miss Thompson is going to be getting lots of admiring attention, as should Natalie Cortez and Miguel Cervantes. Really, this was a simply gorgeous, affecting show. Wish I could see it again, and see how the cast changes are. Michael John LaChiusa wows me again.