A Bloody Give Away: Tickets to Macbeth at Lincoln Center 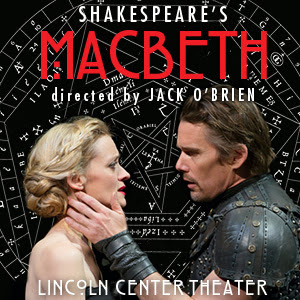 Something wicked this way comes!  Again!   Yes, there's another production of Macbeth in New York again.  This promises to be a very sexy and sumptuous production at Lincoln Center Theatre - all black, white and especially blood red - directed by Jack O'Brien with costumes by Catherine Zuber.   Ethan Hawke and Anne-Marie Duff star as the Macbeths. The other principals are Richard Easton as Duncan, Francesca Faridany as Hecate, Brian D'Arcy James as Banquo, Jonny Arsini as Malcom and Daniel Sunjata as Macduff.   There should be plenty of fun with the witches played by John Glover, Malcolm Gets and Byron Jennings.

I love Macbeth!   My favorite Shakespeare is still The Tempest, but having seen the Scottish play twice already this year, I was surprised to realize how much I really do love it.  The sex and politics juxtaposed against the supernatural lends to a thrilling experience, no matter the setting or size of production.

I just can't resist seeing this production of the Scottish play, which is currently in previews at the Vivien Beaumont.  Tickets are available via Telecharge...or to win a voucher for two tickets, tell me why you want to see it in the comment section below.  I'll throw your name in a hat and draw a winner at random in honor of Opening Night on November 21st.  (Mention this post in a tweet and that will count too - I'm @adventuresarahb)

oo boy, there are way too many reasons I want to see this to list, but here are a few:

The Scottish Play is one of my faves; the first I ever performed in (I played the Bloody Captain & Young Siward in my high school production).

Great cast & crew! Who wouldn't want to see Jack O'Brien's take on this? And Ethan has grown in so many ways as a performer over the years, this seems like a role perfectly suited for him at this stage.

Yes, there are a lot of productions of this show; it is accessible and always seems timely, particularly in years containing elections...

Just a few reasons to see this show at beautiful Lincoln Center!

Too many reasons to see this to list them all, but here are a few:

1) Great cast and crew! Who wouldn't want to see Jack O'Brien's gorgeous work on this classic?

2) Ethan Hawke has grown and refined his work over the years, and this part seems to meet him right at his abilities.

3) This is one of my favorite of the canon. It's the first one I ever appeared in on stage; I played the Bloody Captain and Young Siward. So much fun!

Saw this a couple of weeks ago in previews--ayoung friend of mine has a small role in it (his b'way debut). Would love to see it again after it opens.

I want to see it because I love Shakespeare. (Am basically overdosing on his plays lately, which is easy do in New York this season!) Also very much want to see Ethan Hawke onstage, since I've only seen him in movies ...

What a wonderful giveaway!
I would love to see it not only because I grew up watching Ethan Hawke in the movies, but also because I´ve studied Shakespeare for a very long time but never gotten the chance to see it on stage. I follow you on twitter and shared the giveaway. Thank you, Emely
emely.drugge@hotmail.com

I definitely want to see this cast in action with this classic Shakespearean tale. I'm a fan of many of their previous works and love that they're doing something dark and different. The venue is exciting and gorgeous and I'm looking forward to the full design aspects and seeing everything mesh together.
@Nicole_M_Wright

I really want to see Macbeth because of the amazing cast, especially Ethan Hawke and Brian D'Arcy, and because I've heard it's an excellent production.