More Sondheim: A Bed and a Chair at Encores! at City Center 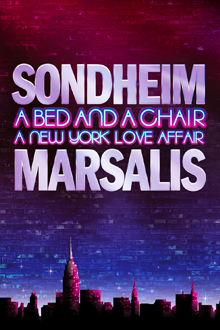 Oh, good grief: yet another Sondheim revue.  How many does this make that I've seen?   Who am I kidding?  I can't resist especially when it's starring Bernadette Peters.  COME ON!

It's billed as "A Bed and A Chair, a New York Love Affair" at Encores! at City Center.

Along with Broadway performers Norm Lewis, Jeremy Jordan and jazz singer Cyrille Aimée, we heard Bernadette sing a compilation of very well as well as lesser known or cut songs from a variety of Sondheim shows.   All of the songs were taken out of the context of their individual shows and ordered to make a new story that was an intimate love story between these four and the City of New York.   Also telling the story were four dancers, Meg Gillentine, Tyler Hanes, Grasan Kingsberry and Elizabeth Parkinson.  Part of the act were projections of photos and panoramic film of the City of New York onto a screen behind the orchestra and, luckily for those of us in the gallery, on to the side walls.

This was a story told only thru movement and song and projections.  The dancing was quite exciting and singing was very satisfactory.   The singing was a mixture of jazz  - even skatting by Miss Aimee and Bernadette! - and Broadway vocalizing.  I loved it all.   Director John Doyle's staging was interesting - provocative and sometimes downright funny.   It was thrilling to hear songs that we love and especially songs we rarely get to hear performed live.  Bernadette tackled The Ladies Who Lunch - and she brought the house down as it was hysterically combined with Agony, Can That Boy Foxtrot and Uptown/Downtown.   I was pleasantly surprised by Jeremy Jordon - quite a looker with a great set of pipes.  He nearly stopped the show with Giants in the Sky.

The combination of the Sondheim, the jazz, the Broadway, Bernadette all exploded into a thrilling evening!
Song List:

Merrily We Roll Along Overture
What More Do I Need?
Another Hundred People
So Many People
Broadway Baby
That Old Piano Roll
Live Alone and Like It
Losing My Mind
Who's That Woman?
Happily Ever After
I Remember
Everybody Says Don't
Someone Is Waiting
It Would Have Been Wonderful
You Could Drive a Person Crazy
Like It Was
Giants in the Sky
Isn't He Something!
Buddy's Blues
With So Little To Be Sure Of
The Ladies Who Lunch/Agony/Can That Boy Foxtrot!/Uptown/Downtown
Loving You
Send In the Clowns
Rainbows
I Wish I Could Forget You
What More Do I Need? (Reprise)
Broadway Baby (Reprise)