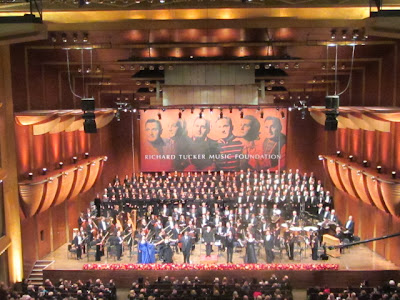 Richard Tucker (1913-1975) is considered one of America's greatest tenors. He sang 724 performances with the Metropolitan Opera plus was broadly recorded. He was profoundly civic and religious minded and devoted himself to helping others both in the music world and general community assistance. After his death in 1975, The Richard Tucker Music Foundation was founded as a "non-profit cultural organization dedicated to perpetuating the artistic legacy of the great American tenor through the support and advancement of the careers of talented American opera singers by bringing opera into the community."

The Foundation offers free performances in New York Metropolitan area and supports music education programs. Each year the Richard Tucker Music Foundation annually awards cash prizes to individual U.S. born singers. There is no application process, only nomination. Prestigous in name and in association to previous winner, it is monetarily generous and acts to further highten the winning artist's career, usually one who is already on the brink of success.  The next top award to be granted will be in the amount of $50,000.

I have seen many of recipients of each of these awards perform in recital or concerts in and around New York and in operas at the Met, the Chicago Lyric, San Francisco Opera, the Washington National Opera, and the Vienna State Opera. Each year the Foundation presents a concert of past winners and current winners. This was my seventh year in a row to attend and I'm already counting the days until next year's concert.

Even though the program was a bit more subdued (and very French) without any of our European friends, the evening was stellar and full of thrills and laughs. Believe it or not, it was a mere 40 bucks* for two and half hours of many of American's greatest voices. You just can't beat a bargain like it and it's seriously my favorite event of the year.

Angela Meade stole the vocal show with her "Tu al cui sguardo onnipossente" from Verdi's I due Foscari.  Her high notes are absolutely on fire!   Susan Graham gave us the most fun with Offenbach's "Ah,, que j'aime les militaires" from La Grande-Duchesse de Gerolstein, complete with choreography with four cute "soldiers."  Tenor Stephen Costello showed us he knows how to have fun with his "Caro elisir!..Esulte pur la barbara" from L'elisir d'amore by Donizetti, which he did as a duet with his wife, and last year's Tucker winner, Ailyn Perez.   Joyce DiDonato was not to be outdone as she showed off her own fireworks with Rossini's "Tani afeti" from La donna del lago.

Everybody looked gorgeous in their gowns and tuxes...but Renée and Joyce really glammed the evening with their Dame Vivienne Westwood gowns.   Bling was abundant too - especially Susan Graham who was practically weighed down with rocks courtesy of Ann Ziff for Tamsen Z.  Renée didn't hide her envy as she and Susie took the stage for their duet from Lakme.  Special mention goes to the percussionist in the Met Opera Orchestra who was kept busy all night with some fantastic triangle playing.

The evening was filmed for Live from Lincoln Center and will be aired on PBS on January 10th.  Check your local listings and set your DiVaR accordingly. 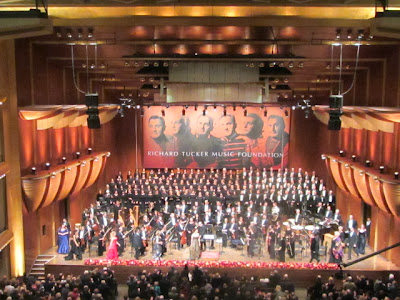 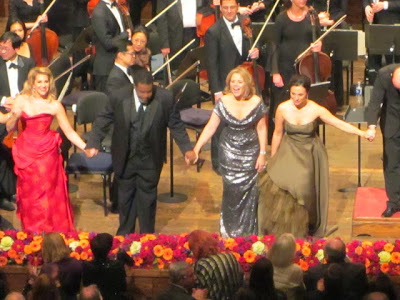 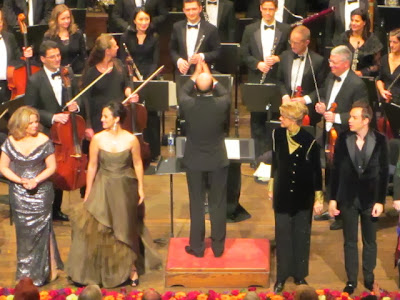 *I buy the least expensive seats in center third tier, but I also make a separate donation to the Richard Tucker Music Foundation.
at 8:43 PM