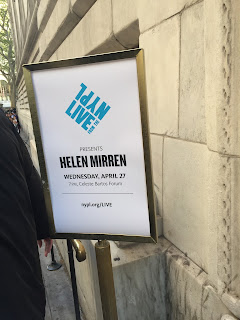 When I was twelve, I went on a class field trip to Odessa,  with my beloved teacher Beth.  Bizarrely and incredulously, in the middle of this mostly forsaken oil town in far West Texas, there's a replica of the Globe Theatre on the campus of Odessa College.

We saw The Tempest.  I don't know if it was a touring production or perhaps a college production, but I'll never forget the feeling of being there.   I will also never forget "Caliban" as he bounded up the aisle, practically into my lap.   I have never been so simultaneously thrilled and frightened.

I had traveled as a child but we moved to West Texas for my parents' jobs and to be closer to family...it wasn't an unhappy time but it also felt like a million miles from everywhere.  Going to the theatre gave me the feeling of independence and escape.  I still feel this way, even living almost 2000 miles from that little place.

Since that field trip, I've seen many productions of The Tempest and it still remains my favorite.  Most of all, it opened a feeling and a world to me that I never grow tired of visiting.

Then this past Wednesday night, I heard something incredibly rare, extraordinary and equally unforgettable.  It was but a moment, but equally transportive:  Dame Helen Mirren read Caliban's monologue from an iphone.


Be not afeard; the isle is full of noises,
Sounds and sweet airs, that give delight and hurt not.
Sometimes a thousand twangling instruments
Will hum about mine ears, and sometime voices
That, if I then had waked after long sleep,
Will make me sleep again: and then, in dreaming,
The clouds methought would open and show riches
Ready to drop upon me that, when I waked,
I cried to dream again.
The Tempest, Act III, Scene II, William Shakespeare.

This came at the end of Dame Helen's interview by Paul Holdengraber at the New York Public Library.

I could never compare myself to Dame Helen.  She's too everything that I am not.  But I did find my past experience collide with hers as she told her own story of coming into Shakespeare.  When she was also about twelve or thirteen, she saw her first Shakespeare; a touring production of Hamlet in her rough little coastal English town, Westcliff-on-Sea.  She says she was transported and hasn't forgotten that experience in fifty or so years.    What if she hadn't seen that?  I shudder to think of an interruption of the fate that perhaps inspired one of our greatest actresses:

"I am a very strong believer in the fact that children, young people I should say, should have their first experience of Shakespeare should be an experience of watching it in the theatre, or an watching
it being acted.  Certainly, that was my first experience....and I was utterly transported...And it lead me into this wonderful imaginative world of characters and storytelling and drama that was so different that was so different than the street I was growing up on..."

The talk was mostly about Shakespeare, a celebration of his 400th anniversary year, and Dame Helen's career as a member of the Royal Shakespeare Company.

The interview was filmed and is still available here:  http://livestream.com/theNYPL/Mirren/videos/121229330

I admit that I've been watching it on loop. 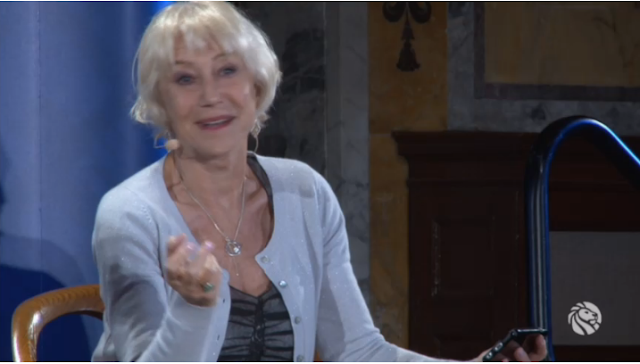