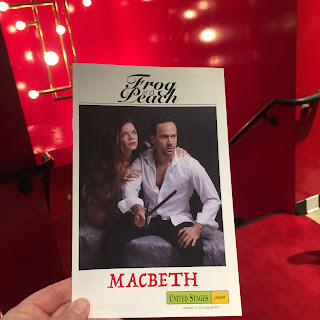 Get tickets to this production of Macbeth as soon as possible!   Click here Ovation Tickets Online or call 866-811-4111. It runs Thursday - Sunday, weekends through February 12th.

Shakespeare's Macbeth, a new production, by the Frog & Peach Theatre Company comes at the right time in our current political climate.  I went in wondering who are the Macbeth and Lady M of this administration.

I have seen many productions of the Scottish play, including Frog & Peach's previous production in 2010.  They have only improved upon and this take is perfection in its simplicity.  Every moment is visually and audibly breathtaking.

Erick Gonzalez (Frog & Peach alum) and Kate T. Billingsley (company debut) are perfectly matched as the scheming couple.  Their ascent and descent had me on the edge of my seat.   I loved Kevin Hauver as Hecate/The Porter.  He was hilarious and the needed brevity during the madness.  Vivien Landau killed as First Witch.  If Shakespeare were still around, he would write a whole play around her and her sexy, fierce performance.   She elevated this role and brought the other weird sisters, Alyssa Diamond and Bess Miller, with her to extremely thrilling entertainment.  All of the supporting cast were fantastic, completely on point with their portrayal.

This is the company debut at the Sheen Center's Black Box.  Its as if the Black Box were built for specially for this production.  You descent down a completely red stair case in to the blackness. It's sheer perfection.

I was thrilled to see another production of Shakespeare by Frog & Peach.  There's something very special about following the same company around town over the years - it's an opportunity to see growth in actors, nuances of skill, new additions to the company. The thing that never changes about this company:  Frog & Peach Theatre never disappoints. 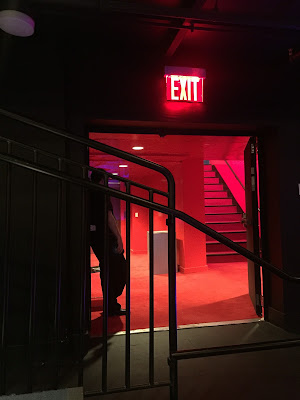