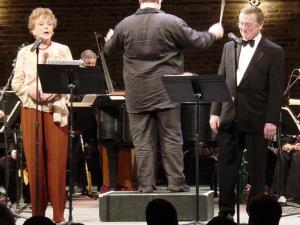 Some know her from the great movies Gaslight, The Picture of Dorian Grey and The Manchurian Candidate. Some of you know her only as that lady on Murder, She Wrote. And who could forget her voice as Mrs. Potts in Disney's Beauty & the Beast? But to me, these legendary performances do not compare to her status as the ultimate Broadway actress in musical theatre. Yes - I'm talking 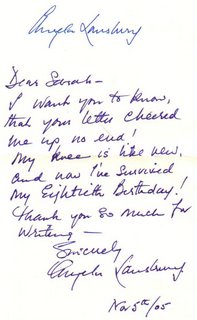 about the one and only Angela Lansbury. I have only been fortunate enough to see her perform live once and it was only one song! She had that kind of impact on me. The already joyous atmosphere at Wall to Wall Sondheim on March 19, 2004 elevated to a stratospheric level when Angie took the stage with George Hearn during the 11th hour of the Sondheim Fest. The standing ovation was thunderous before she even sang her first words "Seems a downright shame" from Little Priest of Sweeney Todd. The love in the room was overwhelming. I mentioned before that I was a Sweeney fan from watching the dvd and listening to the original cast recording but this is moment when I became a Broadway Angie Fan. I always loved her on Murder, She Wrote and in the movies, but this experience was beyond any other level of enjoyment. I saw her again at the Children & Art Benefit Concert for Sondheim on March 21st, but unfortunately she only said a few words. Over the next few months, Noah acquainted me with Angie's turns in Mame, Prettybelle, Dear World and the London cast recording of Gypsy. I poured over her authorized biography "Balancing Act" by Martin Gottfried. Did you know that she holds the record for the most Tonys for a Lead Actress in a Musical? That's four Tonys for Mame, Dear World, Gypsy and Sweeney Todd. Ironically, Angie also holds the record for gaining the most Emmy nominations and never winning (just shows you the inability of tv audiences to recognize greatness).
at 1:10 PM