Lift Off to Gloriousness! 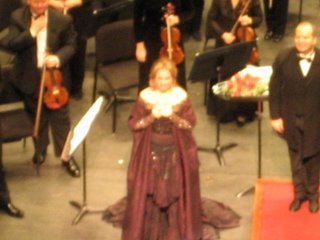 Well, the photos are blurry, but you get the idea. Sally and I made it to Newark without incidence and were pleased to discover a nice restaurant & bar right in the NJPAC - how fortuitous. The hall is beautiful and we were on the first row of the 4th tier. Renee glided to center stage in the beautiful plum and black dress by Gianfranco Ferre that we've heard so much about. Gorgeous. She opened with "Laudamu 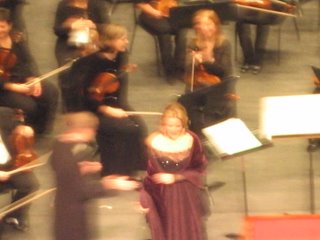 s te" and then went into "Dank sei dir, Herr". The symphony then played and she came back on with "Rejoice Greatly" - it really is one of my favorites that she sings - she really does sound as though she is rejoicing. She finished the first half with the Bach/Gounoud "Ave Maria" - sighs were abundant throughout the house. She regaled us the second half with more traditional Christmas tunes - "Deck the Hall", "What Child is This", "Panis Angelicus", "Away in a Manger", "Poor Mary", "Gesu Bambino", "Silent Night" and "O Holy Night". She told the story about why nobody knows the song "Poor Mary". She said that she remembers her mother singing it at least twice a year every year when she was growing up. She said that nobody ever heard it before because her mother never gave it anybody - she had been hoarding it for herself all those years. She said that after the Morman Tabernacle Choir concert she called her mother about singing it and said "Mom, it is out there now". It was simply beautiful. She came out for encores and started talking about she would do two songs for an encore and then stopped herself and said "oh wait, you're supposed to ask for an encore" - the house immediately started calling for encores. It was altogether funny and fabulous. She sang "I'll Be Home For Christmas" and "Amazing Grace" a capella which we have been hearing so much from all those who were able to attend the previous concerts. For her final song, it was a thrill hearing her soar above the audience singing "Joy To the World" - that is why we pay the big bucks to hear her, ladies and gentlemen! 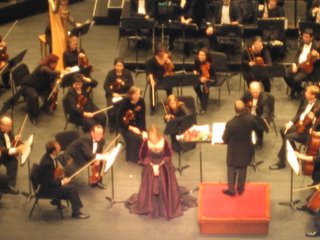 We finally forced our way through the long line of those waiting in the CD signing line to the backstage door. It was a bit crowded backstage. The lady from the documentary dvd was there again. We also saw Renee's hair colorist before the concert and backstage. ( I wonder if these people say to their friends "Oh look, its those TBGers again!"?) Renee was by herself - at least we didn't see the children or any other friends with her. I made my way to the front of the line only to be cut off by a large crowd of "officials" - they all seemed to be on the board, or president of this, or a member of that - I was standing by Renee at this point and she kept glancing sideways at me and rolling her eyes just the slightest - it was great fun. I took my picture of the two of us that was taken backstage at Zankel for her to sign. She said, oh I love this picture and then went on about how she liked her hair in it. She signed it "To Sarah - So Great to See You Again". I asked her if she was doing the Eugene Onegin next season and she said yes. I also asked her also about Der Rosenkavalier with Susan and she said she didn't think so but maybe in Baden Baden (perhaps she's 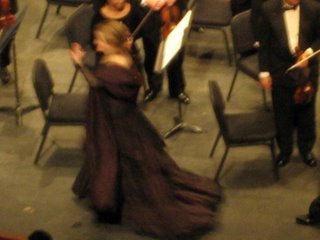 not thinking ahead two years). I asked her if she had a chance to see American Tragedy yet and she said that she's hoping to and wanted to know when it was closing. She said she might get to go the week after Christmas. I told her we'd see her in January at Carnegie! She had a cd/book signing in the lobby and the line was probably 2 hours long. It was a wonderful day and I'm really glad we were able to experience it. http://www.nj.com/entertainment/ledger/index.ssf?/base/entertainment-0/1135059836323280.xml&coll=1

so did Fleming's mother write the song or is it a traditional song? I just heard her sing it and it was just beautiful.