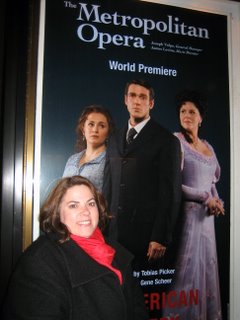 An American Tragedy, the new opera by Tobias Picker, has been an entirely new experience for me. Since January 2004, I have been regularly attending operas at the Met. The first one I saw was with my friend Beth who was visiting from Austin. It was the coldest day in NY since Grover Cleveland was president and we were searching for inside things to do. While channel surfing, we came across Renee Fleming's Théâtre du Châtelet concert on the Ovation channel (more on my favorite soprano later) thus a conversation about opera ensued. I consulted my trusty TimeOut New York and discovered that there was Rigoletto was playing. I called up the Met box office and was excited to find out that the seats were so inexpensive! We fretted that our attire would be too casual -but fortunately you can get away with wearing black for everything. The complete experience was wondrous and thrilling. I returned within the week by myself to experience Madama Butterfly. I had to sit in the very last row of the Family Circle but I was so enthralled that I completely forgot to look at the Met Titles. The rest is history. For the fall seasons of 2004 and 2005, I have been a regular 8 opera subscription member and this year I became a Guild Member. But, up until Tragedy I have only seen the old standards. I was already familiar with the story because of Dreiser's book and the movie A Place in the Sun but to further prepare I attended the artists lecture on Tuesday the 6th with my friend Sally (who has been an invaluable consultant and promoter for opera and classical singers). It was a very enjoyable evening. The artists, Susan Graham, Patricia Racette, Nathan Gunn and Maestro James Conlin, proved to be extremely funny. It was obvious that they have indeed enjoyed the process of preparing for Tragedy. I had them sign my copy of the OperaNews of which Susan, Patricia and Nathan graced the cover and then I had a nice conversation with Susan. She is from Midland, near my home town, so natural camaraderie between us West Texas girls ocurred. On Thursday the 8th, the big night finally arrived. I was tingling with anticipation. I was captivated for the entire 3 + hours. The music was dramatic and sweeping and the voices were rapturous. It was the first English language opera I have seen but I still I caught myself peeking at the Met titles occasionally. I find that the opera libretto moves the plot along, but it is the sound of the voice and the orchestra that tells the story. The acting in the Tragedy was superb. It was beautiful, sexy, funny and heartbreaking all at once. Indeed Tragedy has become yet another object of my impulsive obvessive compulsive devotion.
at 10:01 AM