7. May 15, 2005 - Renee & Brad Mehldau at Zankel - first trip backstage to meet Renee and first time meeting some of fellow TBVers

5. October 3, 2005 - Manon at the Met - First Row and then going backstage for the first time and my friend Sally and I were the last two fans in the room with Renee and then we walked out the stage door with her and her friends as if we were part of her entourage.

4. April 3, 2005 - First time seeing Bernadette Peters in Concert and meeting up with other Fanadettes

3. March 19, 2005 - Wall to Wall Sondheim at Symphony Space with Noah and Vicki - 12+hours of performances celebrating the 75th birthday of Stephen Sondheim

2. April 10-24, 2005 - Mom's visit to NYC - took her to see Tosca at the Met, Steel Magnolias, The Light in the Piazza, Renee at Writers in Performance, Wicked, Ladies in Lavender at the Tribeca Film Festival and Spelling Bee 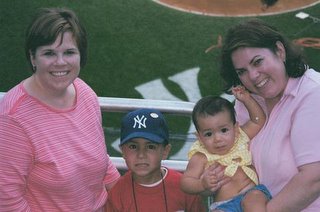 1. July 7- 14, 2005 A week long visit from Cody, Cara and Mary Frances doing all of the NYC tourist stuff including a Yankees game, the Statue of Liberty, the Bronx Zoo and Chitty Chitty Bang Bang on Broadway