You're once, twice, three times...a Tragedy! 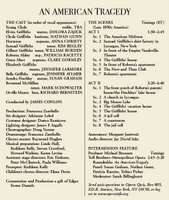 Oh yes indeed, three times is a charm. Tragedy was perfect tonight. It is even richer in luster and anguish. In each of their respective characters, Dolora takes us to soaring heights, Susan beguiles us, Patricia makes us grieve and Nathan draws us in yet disgusts us. My friend Sally said that she did see why some people thought it was "Broadwayish" as it is very theatrical in its presentation. I agree, but it exceeds expectations of Broadway as it is too full for the small stage. It is the sound itself that dominates the imagination.

My new binoculars (purchased at Radio Shack instead of Sharper Image) are great - I could even see the makeup on the guys' faces. The magnification is 17x! But I digress. Curtain was about ten minutes late - it appeared that a couple of string players were running in to their seats just as the Maestro was about to take the podium. The house was slow to fill, but it looked at least 80% full, which is more than we expected. It was an attentive audience (except for the fellow who lost his first lung during the first act a 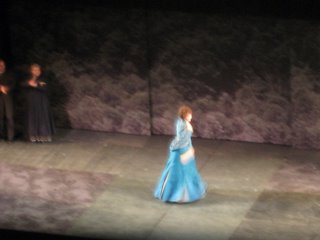 nd the other lung during the second - please go see a pulmonologist and skip the Met next time, sir). There were plenty of bravas to go around for the entire cast. Sally and I went to the stage door just in case we made it to Susie's list - and we did indeed. There was a guy who was trying to get in to see her and he was turned away - he said to the guard, "well I'm not waiting for them to come out", to which the guard gave him a so what look - so we naughtily sang a little nanny nanny boo boo. He managed to get backstage somehow anyway. We finally fought our way through the crowd (it appeared like the majority of the backstagers were going into the green room to hang with Maestro) and while we were waiting at Susie's dressing room door, Shirley MacLaine came out of her dressing room! I said right to Shirley, "well, hello there" and she gave me hi and a smile. I'm such the mental block photo taker - my camera was actually in my hand and I didn't ask Shirley for a photo. Maybe in the next life. Anyway, the access-denied-guy knocked on Susie's door and she came out and gave him a hug. He had an American accent, but I'm pretty sure he was a communist - had the look about him. Susie said hello to some people and sta 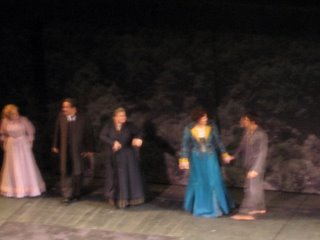 rted talking about the roll. She is just so funny - she had us all in stitches. She said that it is hard work but somebody's got to do it - referring to Nathan and all of the fun scenes - she kept leaning over and looking his direction. She said it is really tough acting. She told us that she thinks that she and Renee would be doing Rosenkavalier at the Met in '09. I told her that I couldn't wait for the broadcast and she said, "I told my Mama to find a fm station that is playing it but I don't know if that will be in West Texas" and I said, "Oh I know but does she have a computer"? And she said, "Oh, don't get me started"! Oh, I just realized, it is tragic that this was my last chance to see this cast in it. Upside of not being here next week - I'll be with my family in Midland. Maybe I'll run over to Mama Graham's and teach her to use the computer. And shazam! I learned how to use the timer on my recorder so hopefully Tragedy will be mine to play, repeat, play, repeat, ....
at 11:36 PM

Email ThisBlogThis!Share to TwitterShare to FacebookShare to Pinterest
Labels: An American Tragedy