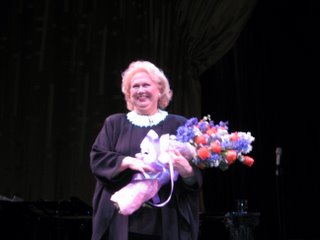 I am still overwhelmed by the unforgettable experience of Barbara Cook's debut performance at the Metropolitan Opera.   I attended the special evening with my friend Noah.

The atmosphere at the Met was electric and celebrities were abundant. We spotted Sheldon Harnick (lyricist for Fiddler on the Roof, among other shows) right away and spoke to him. Noah told him that he is a theatre major and asked to shake his hand. Sheldon said that when he was young, he asked Groucho Marx for a handshake. Stephen Sondheim sat about 6 rows behind us, as did Jeanine Tesori (composer of Caroline, Or Change - Noah's favorite musical theatre work) and George C. Wolfe (Broadway director of Caroline, Or Change and Angels in America among other shows).

Our seats were dead center on the second row of the orchestra (it's good to be a Met Guild member). The floor of the orchestra pit was raised to stage level and was occupied elegantly by five piece ensemble . The Met gold silk curtain was semi-opened in front of a red velvet curtain which served as the backdrop. When Barbara entered, she received a thunderous standing ovation. She not only took this sacred stage, she owned it for the almost two hours of her performance.

She did not attempt to sing in the operatic style, but thrilled the crowd with mostly well-known standards by Arlen, Sondheim, Berlin and Coleman. She opened with Cy Coleman's "If They Could See Me Now", with lyrics slightly changed to fit the night. I could tell that she was absolutely excited and delighted to be there. She said that when she was a little girl that she would spend every Saturday afternoon listening to the Met Radio Broadcasts and it is well known that she attends operas regularly. It was clear that this was an honor for her and an almost overwhelming experience. 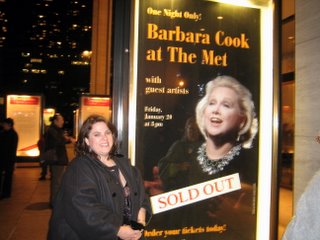 Barbara introduced her first special guest by saying "my friend has to come early because she has her own gig across town at the Carlyle" which prompted the audience to explode. Elaine Stritch received her own standing ovation and then thrilled us with her trademark "Ladies Who Lunch". They then did the hysterical duet "What's So Wonderful (The Grass is Always Greener) from Woman of the Year. They performed the song from huge sheet music which was very funny. Elaine said she wouldn't do it without the music because she already "had enough lyrics in her head to sink the Met"!

Barbara's second guest was the lovely Audra McDonald whose voice is as lovely as her presence. She sang Sheldon Harnick's "When Did I fall in Love" from Fiorello. Barbara and Audra sang a thrilling arrangement of Blue Skies together. 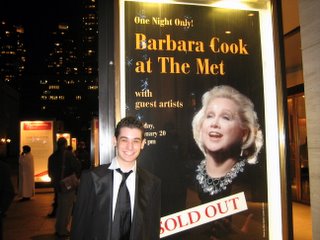 Barbara's last guest was Josh Groban. He sang "Not While I'm Around" from my favorite Sweeney Todd. I was pleasantly surprised by the beauty of his interpretation. Josh and Barbara reprised the duet of "Move On" from Sunday in the Park with George that they performed together at the Sondheim Concert at the Hollywood Bowl. Their interpretation is gorgeous - almost like she is imparting grandmotherly advice.

Barbara's voice rang like a bell. She often looked almost beatific, entrancing us with her youthful light soprano. Known for her memory lapses of lyrics, she began again on several songs - which only highlighted her excitement of the evening and did not hinder in the least. The height of the evening was her flawless performance of "Losing My Mind", which is arguably the difinitive rendering of Mr. Sondheim's brilliant song from Follies.

Perhaps out of respect for the Met hall which was built for the natural voice, Barbara thrillingly closed the show with "We'll Be Together Again" without artificial amplication. 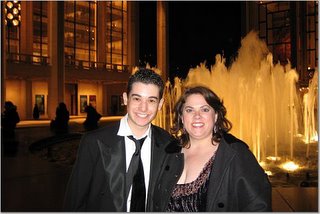 This was one of those nights that will be remembered for a lifetime!
at 1:52 AM