It was a busy Broadway Saturday yesterday for Noah and me. We left my apartment at 8:00 AM to join the rush que for the new musical A Color Purple for $26.50 first row seats. We scored the cheap tickets and then headed to get rush tickets for the new revival of The Pajama Game. We settled for $36.25 partial view tickets for this one. After a fruitful trip to The Drama Book Shop where I picked up "40 Years of Broadway Musical Flops: Not Since Carrie" by Ken Mandelbaum and "Everything Was Possible: The Birth of the Musical Follies" by Ted Chapin, we headed for slices of cheese pizza. Vowing to stay away from the financially dangerous Triton Gallery, we killed a little time by browsing and making fun of the tourists buying POTO memorabilia at Theatre Circle.

On to the 2:00 matinee of The Color Purple: We arrived at the Broadway Theatre to discover that the leading actress LaChanze was out and that the role of 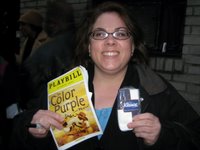 Celie would be played by her understudy Kenita R. Miller. We settled into our first row seats and almost immediately our disappointment faded. Kenita so effortlessly played the role that it was hard to believe that she was the understudy. She took us through the emotional roller coster of this epic story by brilliantly exuding fear and joy at the appropriate times. The entire cast, most of them making their Broadway debuts, was funny and soulful. Being a fan of Alice Walker's novel and the movie starring Whoopie Goldberg, I was excited to see this incarnation. For the most part, the writers transferred the s 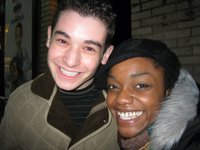 tory beautiful into delightful and vibrant lyrics and a thrilling and memorable score. There is little over-pandering of the stereotypical Black Gospel genre and overall the show is exceptional. I was moved to tears almost immediately and by the end, I wanted to run on stage and hug Kenita. I suggest that you see this show and don't forget to bring your Kleenex.


After the stage door experience (where we met Eartha Kitt!), we went for dinner at the Cosmic Diner. At the corner of 8th Avenue and 52nd Street, although just a typical diner where the service is less than desirable, it is often a good place for sighting actors (David Hyde Peirce and Norbert Leo Butz, among others) on their way to theatres . My friend Todd Buonopane, an understudy in Spelling Bee, actually spotted us through the window and joined us for a nice chat.

On to the 8:00 revival of The Pajama Game: The original 1954 broadway production of The Pajama Game starred Janis Page and John Raitt. Shirley MacClaine, a dancer and understudy in the chorus. Shirley, being imp

atient that she would probably never get to go on decided to turn in her notice and move on to another show. On what would become that fateful night, she didn't bother to arrive on time for the 30 minute call. When she finally arrived, she was met at the stage door by the director telling her it was time to go on for Carol Hainey as "Gladys". She was basically unprepared and when she made a mistake she actually cursed on stage. It did not hurt though because there was a movie producer in the audience and was charmed by her. The rest is history. The new revival by Roundabout is starring the dreamy crooner Harry Conick, Jr. and the beautiful Kelli O'Hara. With its old-school book and recognizable songs (Hey there, you with the stars in your eyes....), it is very enjoyable. The choreography is by Tony Winner Kathleen Marshall who is also directing the production. Last seen in A Light in the Piazza, it is hard to believe Kelli O'Hara is the same actress, which is a testament to her talent. She is stunningly beautiful and she is able to showcase her gorgeous lower range after thrilling us with her high soprano in the previous Tony nominated role. The familiar "Hernando's Hideaway" number is used as showcase for Harry's piano playing. The cast is delightful and the dance numbers are rolicking fun.It was hard not to have a really good time at this very fun show!
at 2:42 PM

Hi #NAME#. Just found your site via free stuffs. Although I was looking for free stuffs I was glad i came upon your site. Thanks for the read!

Information and best buys on products and services of all kinds. Accessories

Hello,
Without much luck, I was searching for blogs about Musical Instruments when I happened across yours. It's a cool blog. Evidently you like telling it like it is! I have a really great ebay website that is easy to use that you may like. If you get a chance, check it out www.licensedbrandsclub.com.