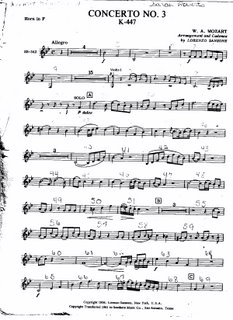 Where were you 250 years ago? Wolfgang Amadeus Mozart was just making his appearance in the world. He only lived 35 years, yet he has remained one of the most prolific composers of some of the most beautiful music in the world. I had been playing horn for a couple of years when my band director Kirk McKenzie gave me the sheet music for the Horn Concerto # 3 to learn for UIL Solo competition. Horn broadened my horizons and boosted my confidence. I was good at it and I loved being a star. It lead to close relationships with my piano teacher/accompianist Liz and my tutor Vanni (although I never did learn theory very well - Vanni will remember her question to me "what is that note? my reply was "first finger"). Mr. McKenzie took a group of us on a field trip and we stopped at a record store. I bought the Tuckwell recording of the Mozart Concerts for Horn on LP. I played along with the record and dreamed of playing as well as he did. Years later, I attended a concert at the University of Texas Performing Arts Center at which Mr. Tuckwell played that concerto with the Austin Symphony. It was one of those transendental experiences where I traveled back to my young life and the wonderful hours spent in the bandhall. Although I no longer play horn on a regular basis, I can still remember the feeling of nailing the impossibly long bar after the cadenza at the end of the first movement. Happy birthday WAM.
at 12:41 AM