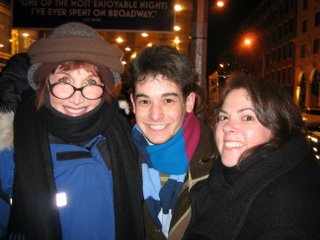 Noah and me at the Dirty Rotten Scoundrels stage door with the fabulous Joanna Gleason on 1/6/06!


In the spring of 2004, I began visiting the Bernadette Peters message board. Some of us posted that we would be in Schubert Alley proir to Bernadette's last performance in Gypsy on May 30, 2004. My decision to meet with other fans turned out to be one of the best I've ever made. I had seen Noah's picture with Bernadette and knew to look for him. I spotted him right away talking to a woman who turned out to be Vicki. The three of us immediately bonded. We couldn't have been more different, but our shared devotion to Bernadette and Broadway sparked a deep friendship. Since that first meeting, the three of us have visited frequently and have attended many shows and concerts together. Our trio has grown to often include Mandy and Ashley and we have come to call ourselves the Fanadettes. Occasionally, our group expands to quite a party when we gather for Bernadette's concerts as we did in Boston, MA, Peekskill, NY and Bethlehem, PA and will again in May, 2006 at Avery Fisher Hall. I have met some incredible individuals through this group. Knowing Noah has been especially rewarding. His joyful and enthusiastic nature is contagious and his knowledge of all-things Broadway is unbelievably extensive. He encourages me to expand my horizons. He inspired me to see Caroline, Or Change, which transformed my idea of musical theatre. He has introduced me to legendary performers as well as ingenues. I have started saying that I'm attending the University of Noah and am majoring in Broadway. It isn't far from the truth. Of course, I turned the tables when I was able to introduce him to Renee Fleming. Later this month, he and I will be attending Barbara Cook's debut at the Met. It will be his first trip to the Met and I hope it will inspire him to attend an opera there. I am looking forward to many more theatre experiences with this group and especially with Noah - I know I will never fully graduate from the University of Noah because he will always be teaching and inspiring me.
at 8:07 AM