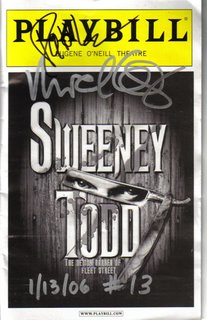 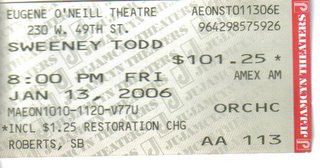 alled with the cast and seeing it from the front row was like seeing it for the first time. The cast continues to increase their intensity in telling the story, digging deeper in both the humor and the horror. I was particularly moved by Diana Dimarzio's performance as the Beggar Woman. The emotion on her face was heartbreaking. Also from the front row, I heard the intricacies of the score - it was astounding to hear the gorgeousness of each instrument working together. It took us a while to be able to leave the theatre so I was thrilled to see the ghost light being brought out. The ghost light is a light with a single li 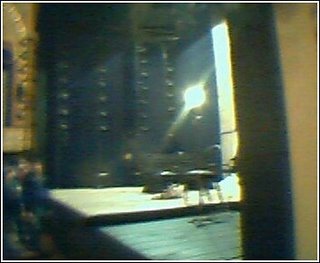 ght bulb that is traditionally placed on the stage after a performance and is left on until the lights come up for the next performance. It is almost mythical - lighting the way for the theatre ghosts when the house is empty. The stage door experience was enjoyable as usual. It was my friend Kari's birthday (yes - Friday the 13th!) and she had the entire cast sign her windowcard - Michael Cerveris added "Bloody Happy Birthday" to it. I got handshakes from most of the cast for it being my 13th time and Michael Cerveris was very funny in asking if I kept coming back to see if it improved and asked if it really sucked in the beginning. We also finally remembered to tell Miss Patti that we would see her as Momma Rose at the Ravinia Festival in August.