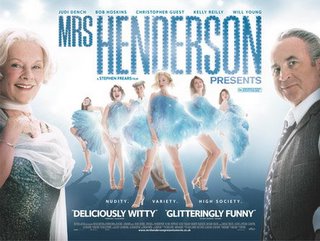 http://www.mrshendersonthemovie.com/ I'm a person who rarely goes to the movies because I rationalize that they are so expensive in New York City that I'd rather save those bucks for a live Met opera or Broadway performance; but, I can't rationalize missing Dame Judi Dench in anything. Yesterday, we braved the frigid wind to see Dame Judi. She has done it again in Mrs. Henderson Presents. As usual, she is magnificent on the screen - damn funny and beautifully poignant - her delivery is sublime. This was a film I especially enjoyed because it is about a woman who opens a theatre - how could I not like it?
at 8:51 AM