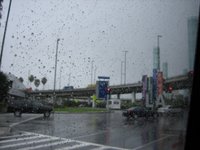 I arrived in LA around 10:00 a.m. to grey skies and rain. What disappointment! I was expecting sunny southern California. Fortunately I brought my coat with me. I headed to my "hotel" that I booked through Hotels.com in downtown LA. I found more of a no-tell motel than a hotel. I was horrified so I left and went in search of the Geffen Playhouse with hopes that there might be a hotel near it. Fortunately, there was a Doubletree within a mile. My trip just got a lot more expensive but it was worth every penny!

The real purpose of my trip was to see Angela Lansbury's performance of Oscar and the Pink Lady at the Geffen Playhouse. I had hoped to take my friend with me, but he had obligations he couldn't avoid. On Friday evening, I arrived at the Geffen early - I actually walked in the door with Anthony Shaw, Angela's son and there she was sitting there! I got too nervous and turned around and walked out - mostly because I was too early. Finally it was time. 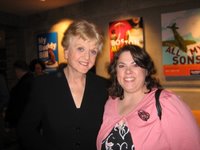 Angie's reading was terrific - she prefaced the reading by saying that she wanted to get an audience reaction before deciding whether or not "to take it to the next step". She had a script but did it mostly from memory and acted it - nobody else was with her. It is definitely a work in progress - I think I remember her saying something to the effect that these were just the letters that the play or novella is based on. Anyway, it was a touching story and seeing Angela act it was the tops. It was clear to me that she wasn't just reading - on Friday night I was sitting to her left and I could see her writing on the pages. She was damn funny and it was obvious that she had invested her emotions into the story. She looked fantastic - hard to believe she is 80. She wore a pink smock on the stage, i.e. the hospital pink lady volunteer. It is a beautiful story and she, along with most of the audience, got choked up at the end. It seemed that mostly friends and family were in attendance as well as a few just plain fans - the theatre was beautiful and intimate and held around 150 seats. There was delicious champagne after. I was fortunate to meet two kindrid spirits there and we took each other's pictures with her. I had a Gypsy Playbill (it took me forever to decide which Playbill to take!) for her to sign and she said "oh this is in lovely shape" and so I told her that it is really one of my favorite shows and I found it on ebay and she said "Really?" And I told her I even found a Prettybelle playbill and she said "You saw that? Wait, you couldn't have seen that!" and I said "No, but I wish I had, so I listen to the cast recording all the time." And she said "It is quite something, isn't it?" It was just one of the best evenings I've ever spent. From now on, I'd like to have Angela read everything to me. Just to be in the room with her on a stage was almost too much. She was ever so wonderful during the reception too. Since I am not old enough to have seen all of the great stage productions she was in, I couldn't miss this opportunity. This woman is meant to be on a stage - forget about silver or small screen. 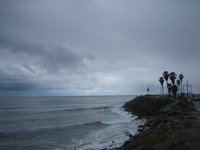 I slept very little on Friday night - partly because of excitement and because I was on New York time I suppose. I left the hotel early and went exploring. Oh the sights! It was a miserable day - there was sleet when I was on Sunset Boulevard! But I managed to make the most of my time in Malibu, Santa Monica, Hollywood, Beverly Hills and 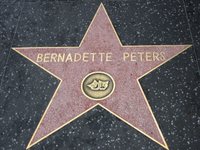 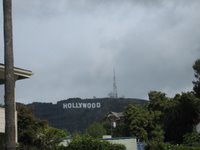 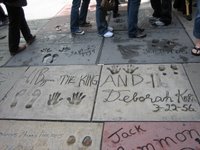 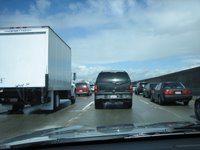 Bonus - when I was driving around lost on Santa
Monica Boulevard, I was radio channel surfing and was lucky enough to catch the Met Broadcase of La Forza del Destino - wow! Now that's a way to spend the afternoon in traffic!
at 6:04 PM

I'm glad you had such a marvelous trip -- your use of your time while traveling is a total inspiration!