Me Heart's A Flutter 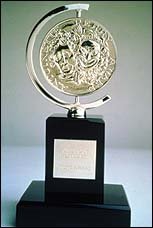 It's 8:38 a.m. Tony Noms in just minutes...shut up Roma Torrey - quit being a theatre pundit!
8:41 a.m. OH the stress. Roma! Pipe down!
8:42 a.m. NY1 56degrees. They keep putting the camera on the announcers - Phylicia Rashad, Liev Schreiber and Natasha Richardson. There's Sondra Gillman standing in the background. Gotta love the American Theatre Wing.
8:43 a.m. Roma, quit talking about Julia Roberts. (Hello, she wasn't nominated - surprised? NO!)
8:44 Here we go! Natasha is going on about leading actor in a play, leading actress in a play...oh yes! Judy Kaye for Souvenir! Kate Burton for The Constant Wife! Lynn Redgrave for The Constant Wife!
8:45 Liev Shreiber announced for the best leads in a musical: Michael Cerveris for Sweeney Todd! Yes! And then the best leading actress is Patti LuPone for Sweeney Todd! Of course! (uh I wasn't listening to the other nominees - guess I better figure out if there's competition)
8:45 Phylicia announceed best play, best musical. I wasn't listening.
8:46 Natasha announced best featured actor in a musical! Yes Manoel Felciano for Sweeney Todd!!
8:47 Natasha announced best original score - The Color Purple, Drowsey Chaperone, The Wedding Singer, The Woman in White
8:48 Stuff I tuned out
8:50 Phylicia for best orchestrations - Sarah Travis for Sweeney Todd! Best direction of a musical - John Doyle for Sweeney Todd!
8:51 Phylica - Best revival of a play - The Constant Wife! Best revival of a musical - Sweeney Todd!
8:52 Natasha - Life Time Tony for Achievement in the Theatre goes to Hal Prince!

Okay, no huge surprises here. And now we wait. We wait for more announcements: Who will host? Who will present? What songs will be performed?

(The Drowsey Chaperone has the most nominations with 13 - so now I have to hurry to see it before June 11th!)
at 8:40 AM

Where did you see the whole version? I was watching CBS and they didnt show even half of it.
I hope Sweeney Todd wins all their nods. And I'm with you; thank God Julia Roberts wasn't nominated!